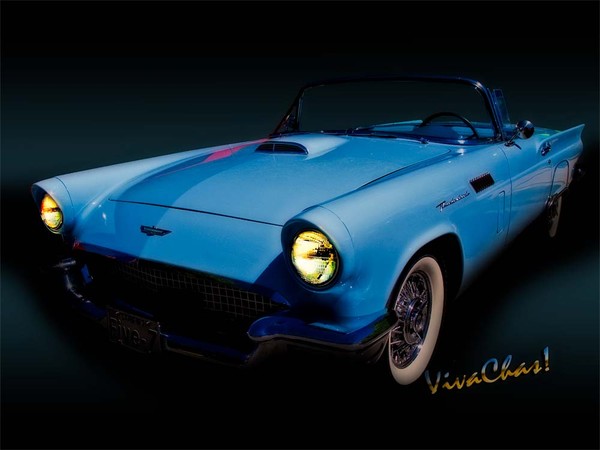 My favorite pre-fifty-eight Thunderbird is the 57 T-Bird Convertible. And this one in Powder Blue is an irresistible retro-tribute to an age. What was known in the 20th-Century as “Mid-Century-Modern” was a time when automobile design blossomed. Cars in general at that time reflected the strong positive attitude of the Post- War era. They reflected the move to “modern” styling. It was a time when proportion was king! So-to-speak ~:0) The 57 T-Bird convertible epitomized the freedom of driving an open car. It was available in a hardtop convertible style that had a cute little port-hole in what had previously been a very wide rear quarter. The advertising of the day credited the glassed nautical nostalgia as a concept to improve visibility when changing lanes. That’s all very nice. But I’ll tell U what I think about the hardtop. Take it Off! Make ur ride a roadster when ever U can – yea! “What if it rains?” – Okay – Who let U in here – Ha! Yeah if it rains use the standard soft-top ~:0) Yeh it’s cool. Gots a nice soft convertible top as well. The designers of the 57 T-Bird had it all going for ‘em. They made the ultimate personal run-about for the American road. And were they at Ford proud of that accomplishment. Just ask ‘em ~:0) Some of U already know that Ford brought back the classic two-seater Thunderbird recently. It’s very nice. It’s probably a better car than the original 57 T-Bird. Gots more gizmos and safer too. Better looking? There are those who’ll argue the point. Though most agree the new T-Bird is too expensive. Yeh – cost too much. Nice car – but most of who would buy it won’t or can’t spend that much. After all – it’s a two seater with modest power. And the rear-end is a bit barren. And it’s not a Mercedes or BMW or Audi. It’s a Ford for crying out loud. Again we here at VivaChas! and Hot Rodney Hot Rods have what we think is the solution to this dilemma. Get urself a nice print from us of this great-looking 57 T-Bird. Get the biggest size u can afford. Put it in the game-room or the clubhouse. Show everyone U got taste. It’ll be the best money U could spend and tens of thousands of dollars cheaper than buying a new one or even an old one for that matter. We are the solution people here at VivaChas! Give urself and ur old-lady a treat. Get a nice art print. She might even like this 57 T-Bird so much she’ll insist U go out and find a retro or new one immediately! - – - Sounds like one of those Win – Win things to me! ~:0) VivaChas! 57 T-Bird Convertible in Powder Blue at Hot Rodney Hot Rods & VivaChas!