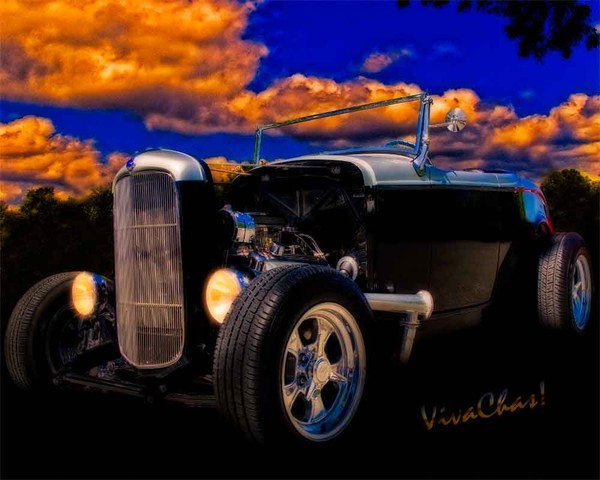 The 32 Ford Roadster is arguably the greatest hot rod of all time.  That may go for the rat rod variation as well.  And let's not forget all the fab 32s we've seen in drag races whether street or strip.  The Highboy was certainly the first incarnation of the 32 Ford Roadster fender-less hot rod.  It's been the ruling king of rods ever since.  The example in this VivaChas! art photograph is no exception.  It may even prove to be the rule ~:0) Gimme a break!  This 32 Ford Roadster in Black & Silver is such a clean machine that I remember approaching it with whispered reverence on the day we did the shoot.  Talk about sanitary - for a driver it was nice and clean.  And yet - it had a delightful patina of road dirt and splash on it that let us know it's been places.  And that's just how I likes 'em! Add to this mighty show and go master-piece the righteous sundown in which we shot it and Uv got the recipe for one of the best hot rod prints U could hope for.  Sunsets staring right into the burning orb with some nice clouds in the scene are nice.  There is no doubt.  But! (there's always a big but in there somewhere as the great Pee-Wee Herman once said) - But, there's nothing like a nice sunset facing away from the bright lights of Broadway and with attention to an object of interest in the foreground with illumined clouds above.  Whew!  Now that's what I call night-fall - Ha! Let's just say capturing a ride with so much black on it has always been a balance between representing the dark of the black and yet showing enough detail to allow the object of interest to show up at all.  I think the VivaChas! crew came through on this 32 Ford Roadster bathed in the fall of night with the clouds still clinging to the last traces of light.  Mighty fine foto in my book if I do say so me own self! Let's remember too that the roadster form of vehicle has always held the "contact with the road" that driving enthusiast have always sought.  That dream is realized in this nicer than nice 32 Ford Roadster.  It's likely holding the grandfather spot in the hearts of rodders everywhere.  Put a bewdy of this print up on ur clubhouse wall and I doubt u'd regret it ~:0) VivaChas!