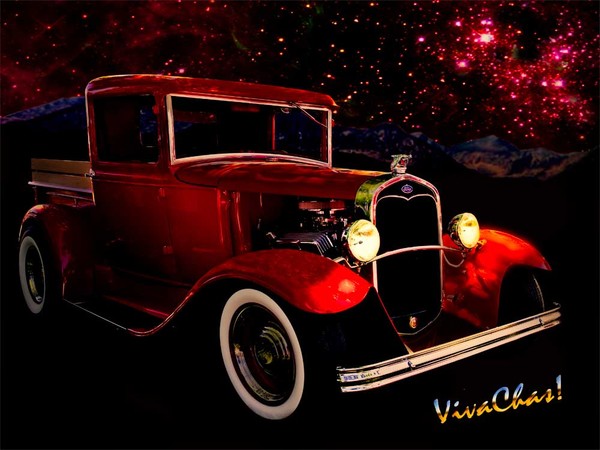 Yeh - get far away from the "Big-City" lights of Kerrville and U can see urself some stars!  This is of course the same 32 Ford Pickup Starlight that we had in the Texas Independence photo.  The air was so clear after the big storm and the clouds moved out that we moved to a darker stretch of track just outside a tree-line and got this shot in a pretty dark neck of the nape - so to speak ~:0) To get our eyes and the camera to see in the dark as well as we did took some extra exposure time - sadly for those who fear experimentation I did not write down the time the shutter opened and closed b/c I don't care about that stuff - Ha!  I know - I said I was turning over a new leaf and being a more kindly person, but I think that's kind enough for imaginary friends ~:0) Once we decided it was time to head on back to the station we discovered no one knew which way to go.  Fortunately my checkered (I really hate that automatic spell checker simply must take time to turn that thing off) past gave me the tools to use the stars and me guides and with dead- reckoning and skillfully working directions into the conversation at a local roadhouse we happened upon we found a familiar looking trail that led homeward as dawn's sparkly fingers were beginning to light the edge of the horizon near Helsinki - so take a map and GPS too and get out there for some photo adventures - course U may never be heard from again but that's the name of the game ~:0) VivaChas!

Artist Reply: How Great is He who hung the stars ~:0) VivaChas!

Artist Reply: Thanks Joan - there's nothing like a clear night in the middle of nowhere to see some stars ~:0) VivaChas!

Artist Reply: Thanks Carol - and that's just how it was that night - we were outstanding on a dark ridge getting serious star gazing done ~:0) VivaChas!