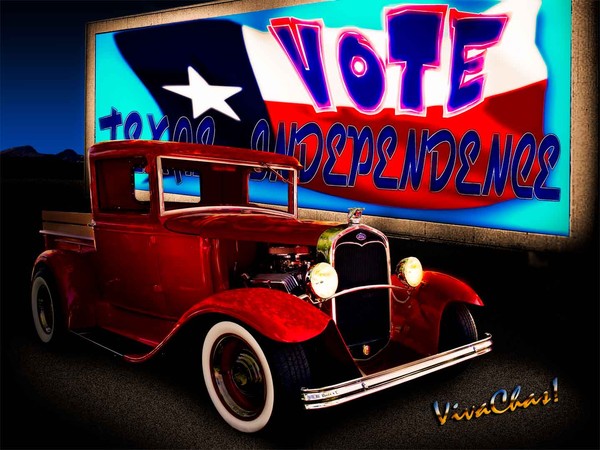 Well – nobody ever said living under the “x” in Texas wouldn’t be interesting and it is! Shot this great 32 Ford Pickup Vote Texas Independence truck deep in the heart of the state right after a thunderstorm one evening that left all the stuff left outdoors squeaky clean ~:0) Bet Ur wondering about the Vote Texas Independence billboard the hot rod is parked next to. Texas was originally an independent republic when the U.S. coerced her into the United States. The state retained its hold on sovereignty and can choose to return to national status – in theory and legally. The U.S. would likely make that pretty difficult seeing how it needs so much of what Texas has to offer. It’s often said down here in these parts that the upper 48's got nothing we need making us better off without them – Texas has oil and gas aplenty for state use – it has the world’s forth largest Air Force according to some – huge standing army and militia what with every property owner in the state constitutionally required to be a member of the state armed forces – why we got NASA for crying out loud and the list of attributes goes on and on from major medical facilities to electronics manufacturing, beef, wool, seafood, and more than I care to talk about in this venue. Point is – I included the Texas Independence billboard on a lark even though it’s taken quite seriously down here – so what we have is a 32 Ford Pickup Vote Texas Independence setting in times troubled enough to prompt Texans to seriously consider cutting the upper 48 loose to freeze in those cold Yankee winters while we sun ourselves on warm Gulf Coast beaches. Come on down and join us if U got the cojones for a good scrap – plenty of room – Real Bewdy ~:0) VivaChas!

Artist Reply: Thanks Karen - it would be interesting to see Texas become what is was meant to be ~:0) VivaChas!