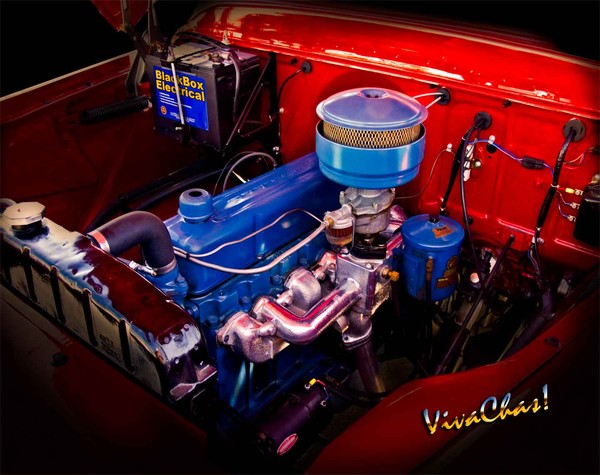 Wow! Normally I don’t care much about the mill under the hood of a Hot Rod, Rat Rod, Custom, Street Rod or Pickup Truck but this oh so simple sanitary truck engine in what I recall to be a mid-century-ish vintage ride is so impossibly clean that I doubt it’s a daily driver! – Ha! ~:0) There is not a drip, scratch or bit-O-rust anywhere to be found on this machine. Now that’s understandable on one of those trailer queen custom rides one often sees at a big city indoor car show. It was completely unexpected at the Boerne Annual Corvette Car Show. Usually even on an engine that is occasionally cranked up and driven up onto a trailer or driven around the grounds to an assigned spot at an outdoor show there’s cooking that happens on the exhaust manifold. On this 65 horse power mill there is not a sign of use. I’m not saying that’s a good or bad thing – I’m just sayin’ ~:0) I’d make one of me special photographs of this oh so simple sanitary truck engine and all, had its hood been shut so I could have snapped its oh so immaculate lines – though I prefer a grittier truck in general. Sadly at so many rod shows trunks, doors, and hoods are all agape spoiling an opportunity for a nice pix of what could be a classic bewdy. ’Course that’s an opportunity in itself that can sometimes lead to a private showing of the car for some really inspiring photos – it’s the old six of one – half-dozen of the other. Just goes to show – the adventure’s out there for the taking. This one’s a clean machine – the next one could be a gritty Rat Rod with free puppies – Ha! Point is – put down the electro-gamer togs and get out and do something fun and do it with mates ~:0) VivaChas!