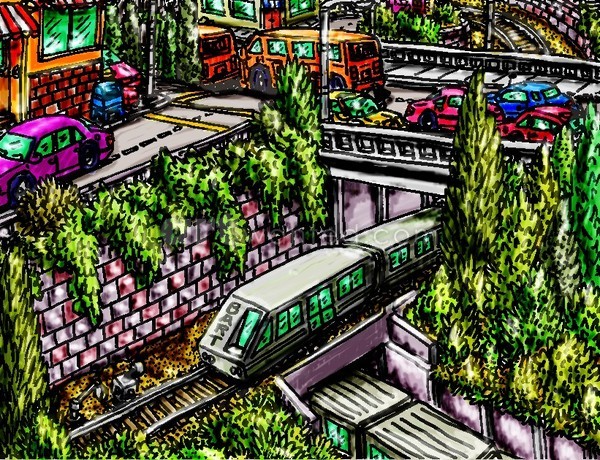 copyright 2012 My take on a local scene of the Bay Area Rapid Transit going through the city of San Jose, California. Currently, the BART as it is called here, is under construction on the segment being added that will take riders from all over the Bay Area in and out of San Jose. San José has a world-renowned quality of life, offering a wide variety of exciting cultural, recreational, educational and entertainment opportunities. In addition, the City of San José has the nation's best public safety record of any metropolitan area, a marvelous ethnic diversity and a beautiful climate. FOUNDED: November 29, 1777 (as Pueblo de San Jose) San José was California's first civilian settlement. INCORPORATED: MARCH 27, 1850 San José was one of the first incorporated cities in California and site of the first state capital. It occupies an area of 178.2 miles. San José is the largest city in the Bay Area, located roughly 50 miles south of San Francisco and 390 miles north of Los Angeles. With a population of 958,789 persons San José is the third largest city in California, following Los Angeles and San Diego. It is the 10th largest city in the U.S. And San José area is home to the largest concentration of technology expertise in the world--more than 6,600 technology companies employing more than 254,000 people. And the climate is warm during summer when temperatures tend to be in the 70's and cool during winter when temperatures tend to be in the 50's. The warmest month of the year is July with an average maximum temperature of 84.30 degrees Fahrenheit, while the coldest month of the year is December with an average minimum temperature of 41.00 degrees Fahrenheit. Temperature variations between night and day tend to be moderate during summer with a difference that can reach 27 degrees Fahrenheit, and fairly limited during winter with an average difference of 18 degrees Fahrenheit. San José boasts an average of more than 300 sunny days per year, and has an annual average precipitation at San Jose is 15.08 Inches. Rainfall in is fairly evenly distributed throughout the year. The wettest month of the year is January with an average rainfall of 3.03 Inches. The highest point is 4,372 at Copernicus Peak, near Lick Observatory at Mt hamilton in the Diablo Range; the lowest elevation is sea level.