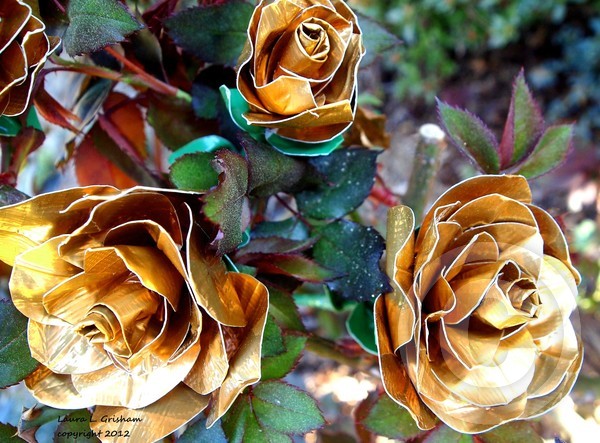 copyright 2012 Laura Grisham *includes photo AND concept After creating roses using Gold Metallic Duck Tape, I staged them in my neighbors rose bush... with permission of course! I was amazed at how realistic the photo's turned out. On another website I received a comment on this image saying it was wonderful "digital art!" There is absolutely NOTHING digital about it! I don't know whether I should consider that a complement or not! Here is the story behind the my idea: Greek Mythology: King Mindas: King Midas was a very kind man who ruled his kingdom fairly, but he was not one to think very deeply about what he said. One day, while walking in his garden, he saw an elderly satyr asleep in the flowers. Taking pity on the old fellow, King Midas let him go without punishment. When the god Dionysus heard about it, he rewarded King Midas by granting him one wish. The king thought for only a second and then said I wish for everything I touch to turn to gold." And so it was. The beautiful flowers in his garden turned toward the sun for light, but when Midas approached and touched them, they stood rigid and gold. The king grew hungry and thin, for each time he tried to eat, he found that his meal had turned to gold. His lovely daughter, at his loving touch, turned hard and fast to gold. His water, his bed, his clothes, his friends, and eventually the whole palace was gold. King Midas saw that soon his whole kingdom would turn to gold unless he did something right away. He asked Dionysus to turn everything back to the way it had been and take back his golden touch. Because the king was ashamed and very sad, Dionysus took pity on him and granted his request. Instantly, King Midas was poorer that he had been, but richer, he felt, in the things that really count. *And there you have it...the idea behind my creation of roses utilizing gold Duck Tape and placing them in a real rose bush to photograph. I love the moral to the story...don't you? *image & concept copyright 2012 Laura Grisham

What a wonderful idea you have had !!!! The result is absolutely stunning and thank you also for reminding us the story of King Midas !!! Fantastic job !!!!

Artist Reply: I'm so tickled that you appreciate not only the art but the work I put into the description...

Totally cool! That's a really clever and excellent idea for Roses! Very Effective. Also what a Wonderful way to preserve them. My P.O.D.

Artist Reply: I sure would love for my new "art form" to catch on...know anyone famous who might like to start collecting? :-D

Your roses are truly marvelous, Laura! And it's neat the way you photographed them in the garden. You're a real cutting-edge (or should I say taping-edge) artist!

Artist Reply: Oh my...you like a good pun just as much as I do! I'm looking forward to creating new flowers and staging them in creative ways...and then having fun with writing the descriptions...and puns!