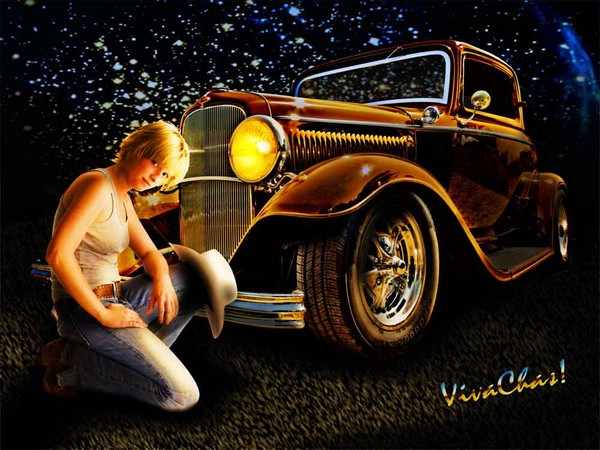 Something I’ve learned about Texas Women since we became Texians is that they are by-and-large – industrious – thoughtful – considerate – brave – clean and reverent – - – those last three are from the Boy-Scouts Oath – - – oh – and I forgot to mention – fetching ~:0) These women are cast from the Purest Gold and generally have the most delightful glow about them – day or night! Now true – some are rough – tuff – and a few are even crude, but let’s not talk about my family – let’s address the idea that I often portray in my photography. Take this particular pix – the tousled blond hair – the vibrant skin – - – let’s face it – today’s model is at the top of her form. She’s at her modeling peak! But where does she go from here? This particular cowgirl is going to college – nothing unusual there – though I think too many people go to college today – they do it to put off the inevitable – - – getting work! I hear some of U moaning out there – but I know what I’m talking about – after all I’ve taught at colleges and universities for some time now – I know what’s cookin’ ~:0) It’s crazy in school today – I’ve watched students morf from busy eager readers to people who type with their thumbs on tiny keyboards in their phones – last week I asked my students to get out their text-books for some class-work and half the class got out their phones and the other half had to break the plastic seals on their books to open them for the first time – and this is finals week – Aggh!!! – - – Sorry – what was I talking about before I got side-tracked on students? Oh yeh – the sweet pretty little girl in this Hot Rod Pin Up is going to college to major in – wait for it – - – World Domination! – I give up! I don’t know about U guys but I’m going out to make some pictures – have fun while U still can ~:0) VivaChas!

It's a fascinating mixture of worldly and celestial beauty!

Artist Reply: Yeh Karen it's just as U say - an almost reverent shoot - everyone was happy - we had fun but somehow more subdued in an almost angelic presence as art was created - thanks K ~:0) VivaChas!

Artist Reply: Thanks Stev - how nice to see U here in the 5000 block (guess what movie that line is from ~:0) VivaChas!