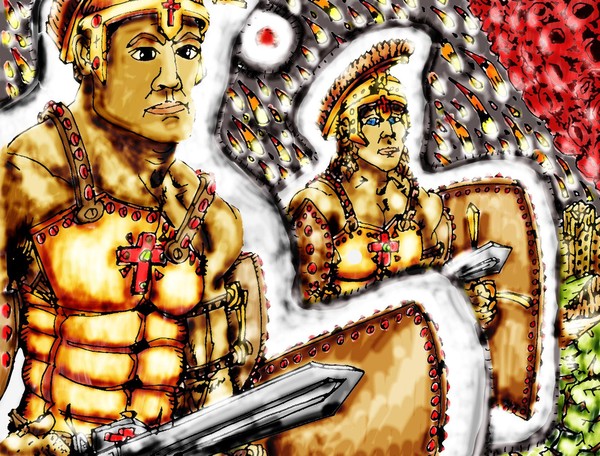 2011c In this time of the fifth trump of the Book of Revelations we are waiting for God's elect to be sealed in their foreheads with the seal of God which is His Word. Then, and only then, will the 6th trump, the 6th vile, and the 6th plague take place which is at the same instant that the evil nations of the world, meantioned in God's word, will surround Jerusalem with their armies probably in an attempt to force the nation of Isael into a peace treaty on their terms. At that moment is when the deadly wound takes place to this one world system which is coming together in this world right now as we speak. A multi-headed beast describes a world wide political system of seven dominions united together under 10 kings,...and the arcangel Michael with his angel will make war with satan and his angel and kick them, satan and the fallen angels, out of heaven down here unto the earth for a five month period called the hour of temptation. At that time satan and his evil angels will appear to everyone on earth as though they are christ and the saints and he will deceive most of the worlds population into believing him with the flood of lies that will proceed out of his mouth. God's elect, made up of men and women from all races around the world, will stand against him and his lies beside and with the two witnesses of God who will arrive here of earth just before that five month period. To do spirtual combat against the lies of the devil, the anti-christ, the fallen angels, and satans children here among us in the flesh pulling the strings behind the scenes of this one world system. This is why it is so important, as the apostle Paul wrote in Ephesians 6 to, right now, put on the whole armour of God to stand against the firey darts of satan, the fallen angels, and the kenites, and having prevailed to remain standing. The helmet of salvation, the breastplate of righteousness, the loins girt about with truth, the feet shd with the preparation of the gospel of truth, the shield of faith and the sword of the Spirit which is God's Word. A good place to get your gospel armour is at www.shepherdschapel.com God Bless!