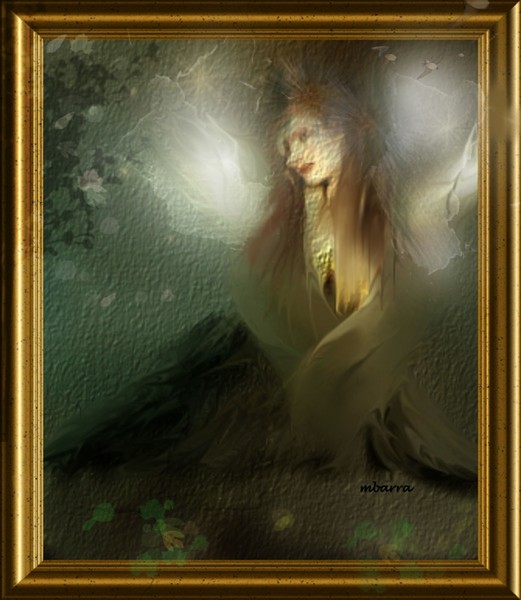 Tinúviel "The leaves were long, the grass was green, The hemlock-umbels tall and fair, And in the glade a light was seen Of stars in shadow shimmering. Tinuviel was dancing there To music of a pipe unseen, And light of stars was in her hair, And in her raiment glimmering. There Beren came from mountains cold, And lost he wandered under leaves, And where the Elven river rolled He walked alone and sorrowing. He peered into the hemlock leaves And saw her wonder flowers of gold Upon her mantle and her sleeves, And her hair like shadow following. Enchantment healed his weary feet That over hills were doomed to roam; And forth he hastened, strong and fleet, And grasped at moonbeams glistening. She lightly fled on dancing feet, And left him alone still to roam In the silent forest listening. He heard there oft the flying sound Of feet as light as linden-leaves, Or music swelling underground, In hidden hollows quavering. Now withered lay the hemlock sheaves, And one by one with sighing sound Whispering fell the beechen leaves In wintery woodland wavering. He sought her ever, wandering far Where leaves of years were thickly strewn, By light of Moon and ray of star In frosty heavens shivering. Her mantle glinted in the Moon, As on a hill-top high and far She danced, and at her feet was strewn A mist of silver quivering. When winter passed, she came again, And her song released the sudden spring, Like rising lark, and falling rain, And melting water bubbling. He saw the elven-flowers spring About her feet, and healed again He longed by her to dance and sing Upon the grass un troubling. Again she fled, but swift he came. Tinuviel! Tinuviel! He called her by her Elvish name; And there she halted listening. One moment stood she, and a spell His voice laid on her: Beren came, And doom fell on Tinuviel That in his arms lay glistening. As Beren looked into her eyes Within the shadows of her hair, The trembling starlight of the skies He saw her mirrored shimmering. Tinuviel the elven-fair, Immortal maiden elven-wise, About him cast her shadowy hair And arms like silver glimmering. Long was the way that fate them bore, Over stony mountains cold and gray, Through halls of iron and darkling door, And woods of nightshade morrow less. The Sundering Seas between them lay, And yet at last they met once more, And long ago they passed away In the forest singing sorrowless.