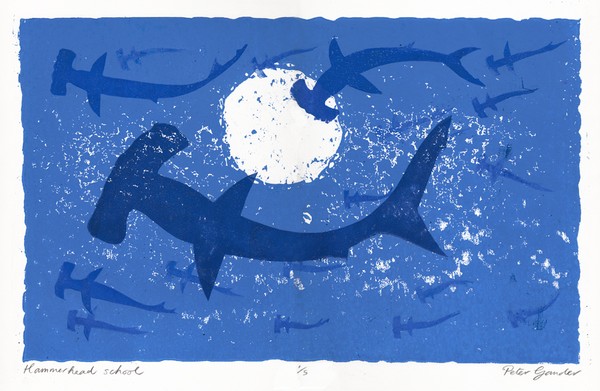 From a cute hippo mother and calf to slightly edgier sharks. Not just any sharks, but the threatened hammerhead shark. I chose this as an Endangered Species entry to the WOFA competition in response to seeing Hugh Fearnley-Whittingstall’s impactful Fish Fight series recently featuring the ghastly practice of removing fins (‘finning’) from living hammerhead sharks and throwing the finned animal overboard to die. Image-wise I was interested in an unusual take on the shark and was inspired by a photograph I’d seen of a school of hammerheads seen from below in layers of blue, the lighter ones a shade paler than those closer to the diver’s camera lens, below a high sun. There are three shades of shark, and the beauty of the Japanese vinyl, compared with traditional lino, is that it prints both sides, so I was able to print a few sharks, turn them over for a flipped image version and hey presto you have a two-for-the-price-of-one images! These were dotted around a master trace of the design and I outlined each one to verify that a space had been taken up, to avoid over-printing an existing shark. Like the two previous posts, King Crow and Hippo & Calf, I opted for a different substrate for the background. Cardboard in this case. Not the corrugated version, but the pulpy type found as a sketchbook backing. The sun images was simply cut out with a scalpel. Board is perfect when after a change of texture, when making simple shapes, or simply when lino or vinyl simply isn’t warranted. For this print, because I wanted a fast turnaround of reprinting and overprinting the same sheet, I opted for water-based (fast-drying) printing inks. For any UK printmaker’s interest, I used Seawhite (of Brighton) block printing inks available online or from Cowling & Wilcox (Soho) if you’re in London. Printed on A3 160gsm cartridge paper (420mm w x 297mm h), 1 of 5 only. See www.petergander.blogspot.com for work-in-progress photos