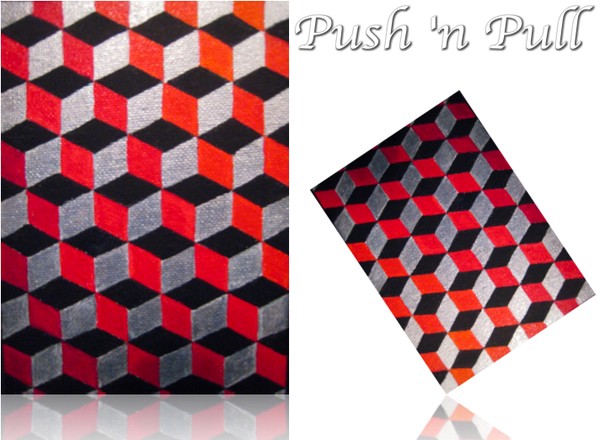 
Here are two mind teasers about what colors can do.
Ever heard of the Push-'n-Pull color technique?

ABOUT HANS HOFMANN:(1880-1966)
HANS HOFMANN developed a technique he called “push and pull,”
He proved that the illusion of space, depth, and even movement on a canvas could be created abstractly using color and shape, rather than representational forms.

I turned the example I painted and look what happened to the depth of the colors! Amazing!

What is a tessellation?
Tessellation is a closed shape or polygon that repeats on all sides without leaving any gaps.

He created symmetrical designs and tesselations, which he described as "congruent, convex polygons joined together."
Contrast is necessary in tessellation.
Contrasts in color, value and tone make contour lines between shapes, so we can distinguish between forms.
Contrast epitomized the dualism of negative and positive space.

All 2-dimensional tesselations have one important property: they can be extended in the plane infinitely in every direction.
Basic to all 2 dimensional tesselations are the three motions of symmetry: translation, rotation, and reflection.
Certain shapes naturally create translating tesselations.
For instance these squares, but also triangles, parallelograms and hexagrams all tessellate.

This diptych is proudly hanging at the art exhibit
"EVERYTHING SQUARES"
which I organized for my students Abstract Advanced Class
at the University of Delaware
(Wilmington Campus - Academy of LifeLong Learning
Will be sold as a diptych or separate.

Copyright Olga van Dijk 2010©
This is another OLGartsProduction©2010

Contemporary paintings & collages are available in all mediums by special commission through OlgARTS Gallery
Contact the artist directly via email with serious inquire.

Acrylics on canvas board 7x9 inches each.
Framed in luscious silver wooden frame.

Oops, the last anonymous was me. This one is my today's POD. Love and light back to you...

Artist Reply: Thank you for your wonderful comment Bernie! I'm honored. Thanks for the POD!! And enjoy your weekend!

Not only Escher/Hofmann, but Vasarely too. You are a great master, who carries the abilities to paint nearly everything at an utmost level. To reply to your question: I was inspired by Alexander Rodchenko.

Artist Reply: THANK YOU HON! I love your last 2 downloads!