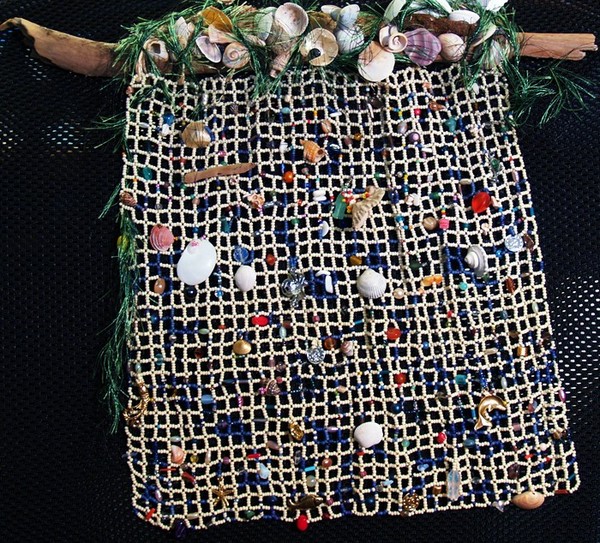 I got the idea several years ago to make a "fish net" out of seed beads and incorporate different items you might find along the shore. I made it up as I went along with no pattern...just adding things where I felt they were needed. After all if you see an old net washed up on the beach with things caught in it...there is no pattern. The first one I did (which was really big, around 2-3' on each side) sold for $450 at an art show a couple of years ago, and now hangs in someone's beach cottage. It was the biggest sale I'd ever had on one piece! I then made a second smaller one, which sold soon after I finished it. The muse struck again, and this one's quite a bit bigger than the last one, though not as big as the first one. This is the first one where I've used fiber to represent the seaweed. It's all handwoven in right angle weave, and I've added shells, driftwood, charms, pearls, beads, and fiber and whatever else struck my fancy. The net is mounted on driftwood encrusted with shells. It took several months to complete. Size: approx. 10"x10"

so BEAUTIFUL.. I LOVE The idea.. its so inspiring.

Artist Reply: I know this is really late in coming, but thank you, Nira! :)

Artist Reply: Hi Sharon, Thanks so much for such a great compliment on my work. It's appreciated very much :) Tricia