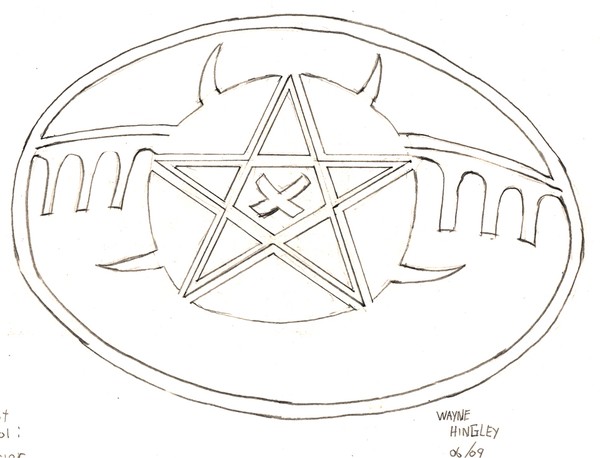 This is my take on one part of Stephen Erikson's novel "Toll The Hounds." On the Malazan site, someone wanted peoples idea of what the symbol might look like. Here's mine. "Tens of thousands now followed the ox cart and its burden as it made its way down from Lakefront and into the Gadrobi District. Bells rang; the Great Ravens wheeled, adding their wretched cries. And already, from the hills beyond Two-Ox Gate, clouds of dust rose into the morning sky. Caladan Brood did not need to hew each stone, or drive spade into stony soil. The warren of Tennes had been awakened, and the flesh of Bum was given new shape and new purpose. In this chosen place, a hill was being transformed. And by the time Brood led the ox up to the barrow's passage entrance, and took the body of Anomander Rake into his arms, the chamber within was ready. And when he then emerged, pausing as if startled upon seeing the tens of thousands of silent mourners forming a ring round the hill's base, an enormous capstone had risen into view, splitting the grassy ground. And when with one hand Caladan Brood had guided it into place, he drew his hammer. To seal the barrow for ever. Anomander Rake was interred in darkness. Weaponless, accompanied by no gifts, no wealth, no treasured possessions. His flesh was not treated against the ravages of decay. The blood and gore covering his face was not even washed away. None of these gestures belonged to the Tiste Andii, for whom the soul's departure leaves the flesh blind, insensate and indifferent. Dying delivers one into the river of darkness, that passes into and out of the ruined city of Kharkanas, the womb long dead, long abandoned. Into the river, and the river must travel on, ever on. Caladan Brood sealed the barrow, and upon the capstone of bleached dolomite he set a symbol, carved deep into the stone's face. An ancient Barghast glyph, its meaning precise and yet a thing of countless layers - although this is known only to those who in life come to face it directly. A single Barghast glyph. Which said Grief."