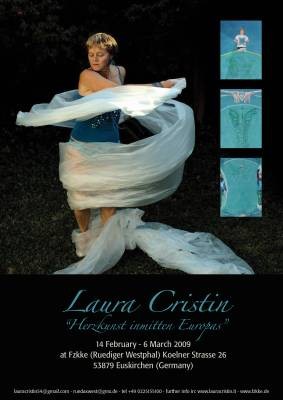 the image represents the poster for my performance "Herzkunst inmitten Europas" (photo by Laura Maria Mino, art Alice Paviotti, 3 ensigns cm 65x70, mixed media, 2008-2009 by Laura Cristin). Laura Cristin starts her professional year 2009 travelling to the heART of Europe, from Italy to Germany. To be precise, she will be in Euskirchen from February 14th to March 6th, guest of Fzkke association, run by Ruediger Abshalom Westphal, around the Time of Carnival (FastLOVEnd there) that also marks the beginning of Tibetan New Year, for an ‘open project’ of Herzkunst around/in the land of Cologne. She will spend the late Winter as ‘Sheren’, in the places where Romans first came, Beethoven was born and Lorelei still astonishes with her enchantments sailors on the river Rhein. It is another step of her ‘recording by heART’ that started in Ireland in July 2008 during the ‘art residency’ there, when visions-actions-sounds gathered from the past in various places while travelling around the world, were revisited next to the Ocean and in the Myths’ callings. -Very soon all that ‘recording’ took shape almost by itself in various forms of “DivinAtions”: paintings, performances, concepts, ideas, suggestions that came out, revealed them to me that I could play and act my art practice in different roles, being an happy subject, object or contributor in the flowing of Time. In this dynamic ‘mode’ I could enjoy with equal satisfaction a main part, for instance while painting the 3 ensigns that were started in Ireland and finished in Italy or while performing a Sheren piece, as well as ‘so called’ minor roles. It was/is a beautiful discovery that I can develop my art better even and just because being at disposal of somebody else with similar attitudes. It happened when I completed mezzo soprano Dorothea Fayne’s action in Venice Carnival 2008, when I let my body, mind and soul be the voice of Dario Della Rossa’s Music (in almost all my/our performances), when I was the Siren model for the photographer Laura Maria Mino or while contributing to Mirko Onofrio’s concert “Re-visioni di Francesco Landini” as body artist in the duet with jazz player Eugenio Colombo in S. Severina Festival, in Calabria (August 2008). Practising in/with Herz-Cuore-Love-Corazón is rewarding for the simple fact that one acts in the common human wave of giving-receiving that does not require particular explanation or a special language to be understood. With this attitude I turn to my “Herzkunst inmitten Europas”, filling my luggage as emigrant-artist with facts, things and recallings that are not memories because they are still alive and ready to grow in fruitful lands-. CONTACTS&INFO from 14Feb-6Mar 2009 [email protected] (www.lauracristin.it) at Fzkke (Ruediger Westphal) [email protected] Koelner strasse 26 53879 Euskirchen (Germany) Tel +49 0 2251 55100 www.fzkke.de