Jesus And The Centurion 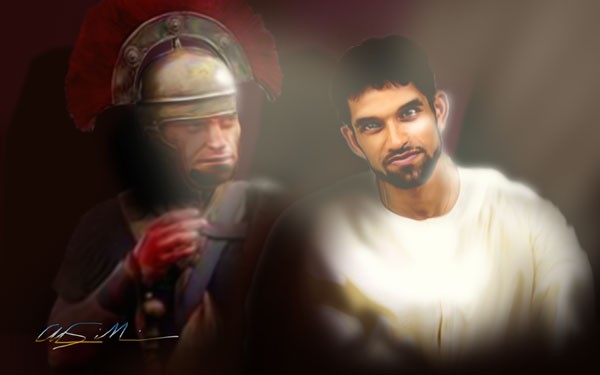 Jesus And The Centurion When mighty Rome ruled the world a part of its strength lay in the Century... A hundred years you might ask? No, the Century was a military unit of a hundred men commanded by an officer known as a Centurion. Centurion - commander of a hundred - much like today's Company, also about a hundred soldiers. This illy is for the Bible Story book project of which I find meself fortunate to be a part. This occurrence is a particular fav of mine, perhaps because I can understand what it's driving at. Rome occupied the world around the Mediterranean and to make that so required the stationing of soldiers throughout these subject territories. There was a certain Centurion whose servant was ill - close to death - and he went to Jesus to secure the healing of his comrade. When the man made his request Jesus rose up to go to his home to heal the servant - for a rabbi to go to the home of a Roman Soldier was unheard of in Middle-Eastern culture. The Roman, having been stationed in the region for something more than sixteen years - according to the workings of the army at that time, certainly knew and understood the customs of the people whom he over-saw. He said to Jesus, "Lord, you don't need to come to my home to heal my servant. Just as I can say to one of my men - go here - and he goes. Do that - and it is done. As the commander of a hundred I understand that you need only speak it and my servant shall be healed..." One who commands understands the Commander and the way things work. Oh yes, the servant was healed at that very hour - at a distance. Bewdy! ~:0)

i agree... and cannot add anything to this other than it is too one of mine.

Artist Reply: Thanks CGZ - I often use this story in business and day-to-day conversations - it is a strong verbal image ~:0)

a compelling interpretation of the scriptures to b sure sir chaz.

Artist Reply: Thanks Annette - He's the Great One ~:0)

This is stunning, I love the glow you have given to Jesus, it has a real supernatural feel to it. Is thing also going into the book your making? Very Striking, Excellent work

Artist Reply: Yeah Gavin - He's me brover and king - got that going for me - really glad this particular project of illustrations came along - they're challenging and fun ~:0)