Uinta Opera ? The Caruso of Yellowstone 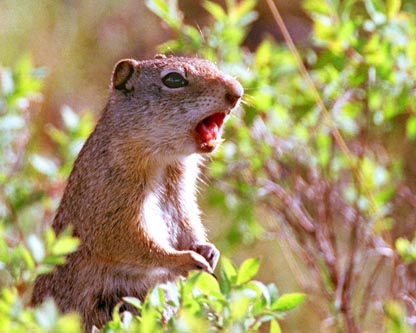 This is a photograph of a Uinta Ground Squirrel, it looks as if he is singing opera with his little hands folded together,to me at least. While out photographing wolves in Lamar Valley of Yellowstone, I was standing around with some others and kept hearing this constant alarming chatter/squeaking. I findly found the source of it and thought that we had upset this squirrel by being close to it's burrow. I moved away a bit but the chatter continued. I thought to myself,this squirrel really is territorial about it's space,and really wanted a wide berth of it from us.I have photographed many squirrels but never had one up in arms like this,usually they sit there and stare back at you or will retreat back into their burrow. After a few minutes it all became clear. It was calling it's mate that had been out foraging. For as soon as the mate showed up, all was bliss and I was blessed with this image. Hope you enjoy The Caruso of Yellowstone. And it is pronounced as U In Ta Ground Squirrel. Oh Yes, Another question I get asked. Those are his teeth.

What a great oportunity... Love it...

nice shot, looks like he is saying hey boys get a load of this non fur bearing specimen__geoff