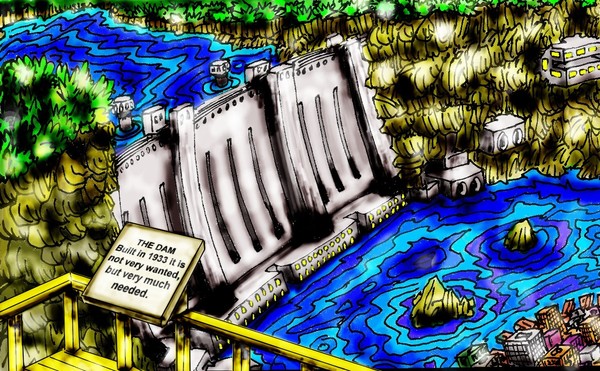 (c)2008 Dams aren't built much anymore in the United States,...but around the world dams are under construction. Found to be an inexpensive source of natural, inexhaustable power, dams, for there power, are cheap to build and operate. And that power a dam gives back, is a better alternative to fossil fuel burning powerplants. So why are there still those who oppose the construction of new dams, but only for reasons of preserving nature. It's for reasons of saving the environment, and a desperate need for energy, that dams are a good choice. You can't have your cake and eat it too. So, a dam, many times,...may not be wanted, by some,...but desperately needed by the majority of those people they benefit. Remember nature and the fresh air environment in those areas which are fortunate to have a dam as their source of power. I our area that is not so.

Both A Cultural and Aesthetic Triumph; Particularly the colors

however, in places such as my back yard bayou, that has a green tint and hardly any water, due to a dam up-bayou from here, I contest! lol great work gregg