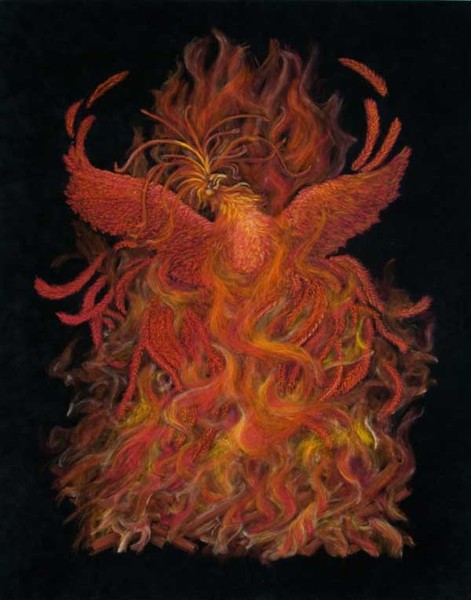 In Egyptian mythology the Phoenix is a beautiful, legendary bird with a tail of gold and crimson that lived in Arabia. Only one phoenix exists at a time. Near the end of it’s 500 year life cycle the phoenix builds a nest of cinnamon twigs that it ignites; both nest and bird burn fiercely and are consumed by the flames. A new, young phoenix springs forth from the ashes.

Names, descriptions and life-span vary in different mythologies. In Egypt, the phoenix represented the sun, which dies at night and is reborn in the morning.

The Greeks identified it with their word phoenix meaning the color crimson. According to the Greeks the phoenix lived in Phoenicia next to a well. At dawn, it baths in the water of the well and sings an enchanting song. So beautiful is this song that the sun god Helios (Apollo) stops his chariot (the sun) to listen.

Early Christian tradition adopted the phoenix as a symbol of both immortality and resurrection. Modern folklore uses the magnificent creature as a symbol of renewal, rebirth, and starting anew.

This is awesome Diana, very impressive portfolio of works!

Artist Reply: Thank you, Cathy. The same back at you!

simply...wonderful!!! I have always thought the phoenix is our most mysterious creature. I kinda wonder if they still exist.

Artist Reply: Thanks, Rebecca. The phoenix myth is definitely hopeful, and one of my favorites. It's reassuring to think that one can start fresh.