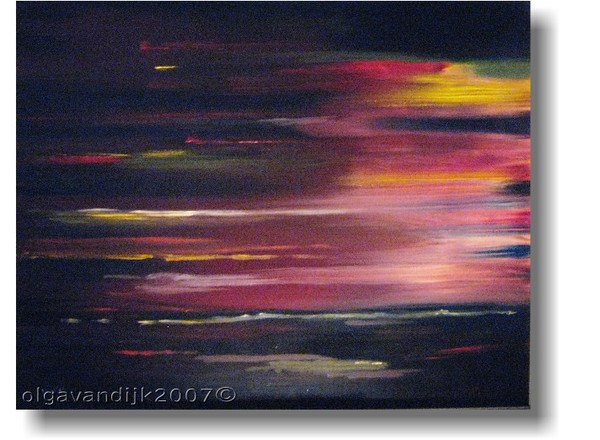 "Nights in White Satin" is a 1967 song by
The Moody Blues
first featured on the album
"Days of Future Passed."

To listen to this music
please click on:
Nights in White Satin

HISTORY about oil on wooden panel.
Panel painting is very old; we know it was a very prestigious medium in Greece and Rome, but only very few examples of ancient panel paintings have survived.
The Dutch Jan van Eyck (pronounced: ven ike) *1385 –1441, was the "re-inventor" of painting with oil media on wood panel.
He is considered one of the great painters of the late Middle Ages.

Until canvas became the more popular support medium in the 16th century, wood was the normal form of support for a painting.
Canvas took over from panel in Italy by the first half of the 16th century.
In the Netherlands the change took about a century longer, and panel paintings remained common, especially in Northern Europe, even after the cheaper and more portable canvas had become the main support medium.

Copyright Olga van Dijk 2007
All rights reserved.
Unauthorized copying or use of images is prohibited.
This is another OlgArtsProduction©2007


Contemporary paintings and collages are available by special commission through

This one is fantastic too Olga. Great colors in the sky and "just touching" the water.. Joanie

Absolutely excellent art work. I like your way of presentation as well.