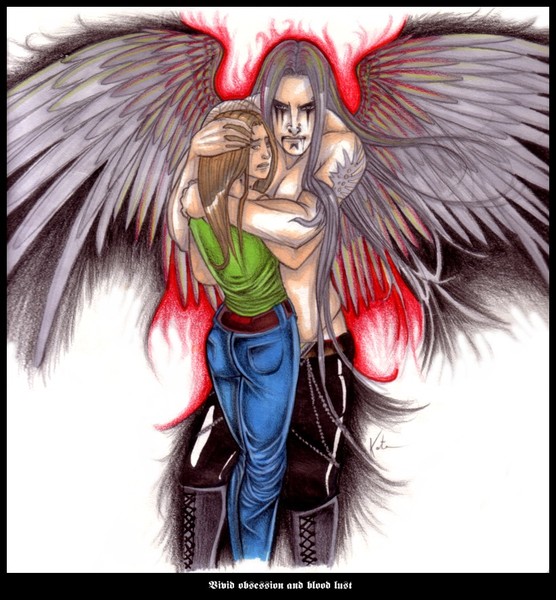 This is it. The colored version of 'A half-demon's obsession'. I decided to color it by a head's slap. I wasn't supposed to but ended up doing the opposite. If I can get the money, I will tattoo it on my right arm, just under my tribal dragon. It's going to be f*cking expensive but it will worth it, I feel it. I guess it's one of my biggest color job so far (if I do not include any background) and honestly, I'm proud of it. Oh, and a message for whiners: Yes, I draw Emily and Keith really often. Call this unoriginal, I don't give a damn. I won't draw something that I don't want to. If you can't accept this, then go somewhere else and stop watching my artworks. Thanks. Ah, I said it. Finally said it. So! Talking about the piece itself: it's rather simple. I actually talked about it in the lineart version. But I will explain it in detail (yes, I always have to explain my artwork as they are not drawn for nothing.. well. Most of them). This is Emily and Keith. I guess you knew it already. In my novel (in the third book), Keith becomes somewhat unstable and violent with Emily because of many events going on in his life. Briefly, he protects Emily but in a way she doesn't really like. And briefly, he can't take it. Remember the artwork called Douloureux regrets? Well this one is the scene before Keith regrets it. And well. He doesn't really have wings; I just wanted to add a pair. How obvious since I wanted to make it more tattoo-ish. The tools I used: Prismacolor markers, Prismacolor colored crayons, Faber Castell colored crayons, black china ink pen, HB pencil (for the lineart and sketch). Time taken: A good 15 hours for sure. Artwork and characters © to me. Do not steal. Do not use or edit without permission.