Dryad Seranade To The Ravens 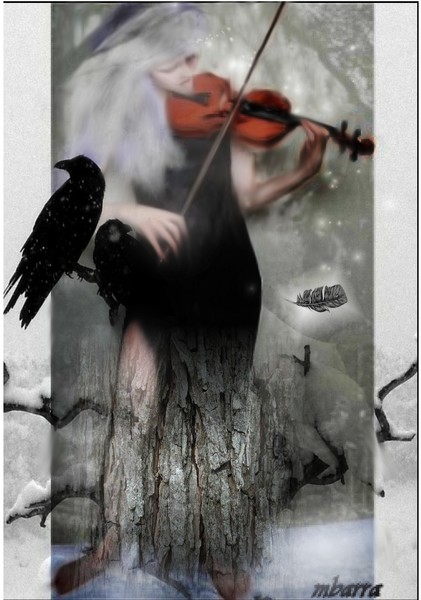 Lore: Dryads prefer willow trees to all others, though they live in all of the 13 Celtic sacred trees. Faery willows which lodge Dryads are said to walk about at night seeking new locations to lay down their roots. Some persons have said that they have learned much unrecorded tree lore by observing how the Dryads' songs and appearance subtly alters as they flit from tree to tree. It was the Dryads who gave the secrets of tree magick to the Druids and aided them in learning about divination and astral travel. The Dryads make beautiful music and their voices, sounds which are very compelling to humans. And while no humans have been harmed by following these irresistible sounds, caution is advised lest you be tempted to stay overlong in the astral realm. Dryads may have been native to Greece, where they were called Drayades and were also female tree spirits. The most famous Greek Dryad was Daphne, who was pursued by Apollo and turned into a laurel after repeating a prayer to a Virgin Goddess. The Greeks also had male tree spirits known as Drus, and treebound faeries call the Hamadryads. Unlike Celtic Dryads, Hamadryads could not move from tree to tree but spent their entire lives in only one. There they were born, lived, and died. Where to Find Them: In the physical or the astral you must go to a grove of trees, preferably one with willows and other Druidic sacred trees. Also look for them in the Faery Triad of oak, ash, and thorn, or in rowan, birch, and elder trees. How to Contact: Invite them to your circle and ask them to join you in whatever ritual you have planned. Even if they don't show up at your circle, they may send you helpful energy if they feel your request is a fair one. If you are in Faeryland they may find you. Dryads will often show up to circles when the spirits and guardians of the east are called. Magickal and Ritual Help: They are thought to be useful in human attempts to connect with deities if they are approached properly. As they did with the Druids, they may be persuaded to teach you the secrets of divination, astral travel, and tree magick. Begin forming a solid relationship with these faeries by working with them frequently, butbe willing to be patient with their games.

Miss Maggie, very busy making our eyes happy with your wonderful creations. All so lovely and full of myth and mirth. Excellent work, my sweet. Michael