STORM IN THE CITY© 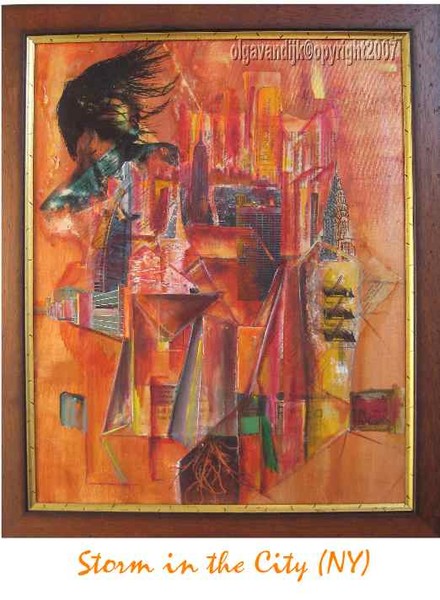 This collage/painting is juried in the 2007 Center for the Creative Arts Annual Regional Fine Arts Exhibition.(Yorklyn, DE)Oct 5 -27, 2007

STORM IN THE CITY©
is a COLLAGE in gold- and red tones.

There is quite a bit of symbolism in this collage:
The waving hair (left) represents the storm.
The roots represent the Dutch (we seemed to be everywhere!) who settled down in NY in 1624.
(New Amsterdam!)

I played with VALUES
(the relative lightness or darkness of a color)to create complex illusions and also to define form.
Strong contrasts in value within a composition may define the boundaries of forms.
Gradations of value, or shading,
can also create the illusion of contour and volume.

Training the eye to keep on looking beyond first impressions is a crucial step in developing true visual literacy.

New York is home to the world's first tall commercial buildings and has a heritage of skyscraper history like no other city.

New York, located on one of the world's great harbors, was settled by Dutch(!) traders in 1624.
It never lost the aggressive, business-like spirit they planted here. (roots in my collage)

In the excerpts you also can see the Art Deco style Chrysler Building, which was the tallest building in the world from until 1931.
Then it was surpassed by the Empire State Building. It is still the tallest brick building in the world.
The tower culminates in a beautiful, tapered stainless steel crown that supports the famous spire at its peak.
At its completion the Chrysler Building overtook the Tour Eiffel as the world's tallest man-made structure.

MATERIALS:
I used everyday items such as newspapers , magazines, tissue paper (for texture)
and some modeling paste to soften down the edges of a transference.

Copyright Olga van Dijk 2007
All rights reserved.
Unauthorized copying or use of images is prohibited.
This is another OlgArtsProduction©2007

Contemporary paintings and collages are available by special commission through

Being a native New Yorker who has been transplanted to the country, I appreciate the waving hair, remembering well the Battery Park of lower Manhatten where the wind almost always seems to blow, and the artefacts and colonial buildings [an old fort] that were made by the Dutch when then settled in Manhattan in the 1600's. Your choice of colors and composition capture the energy of the city very well.This is a unique presentation. Very nice~!

Now thats a storm I could live with Olga. XX