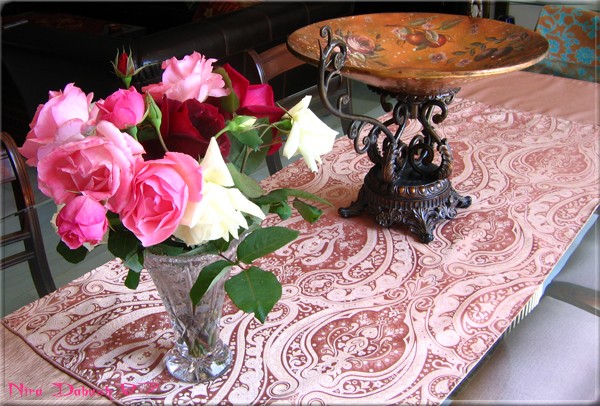 Roses from the Studio's jungle. Photo taken at my parents home.My father picked them up and put them in the vase,for my mother and himself also probably .I'm very a romantic person :-)...I think :-)...I wish to know are you a romantic person yourself...?...Do you think a romantic person can be not romantic at times...or if you are romantic,are you always romantic?...Do you think women are more romantic then men ?...Just few questions I had in my mind.Do you think we born to be romantic...or we learn it...?...Thanks for viewing reading commenting.May we all have a ROMANTIC DAY! Copyrights (c)Nira Dabush

Yes Nira this photo portray what true romance, simple acts that carry weight. I like to think of myself as a romantic, but with every generation the definition seems to change, not always for the best. I thought about your question over thr weekend. I think romance has certainly been jazzed up but also dumbed down in the sense love has a price tag attached to everything. Watching a silent film from the 20s shot at a seaside amusement I noticed the men and woman wore their best suit or dress for each other but at the same time recognized neither had the money so shared foods, hitched a ride home on a truck, and attached great sentimental value to some little prize won playing a game or found in a box of cracker jacks. Nowadays dates are rated on how much money is spent, appearances mean something based on the importance attached to the function (going to movies was once considered a formal now its casual), competitions exists to show off to friends my girlfriend or boyfriend is better than yours based on job and income. Men and women both turn on the charm in the expectation of getting something. Both also use charm as a substitute for not they having much. At least these are my observations.

How lovely Nira.. and it seems to me like your Mom and Dad are still very romantic together.. this is WONDERFUL!! As for your questions; yes I am a romantic person. yes I believe a person can turn it off and on when they please (they are called a "Player"); Others are romantic all the time like my bother Dave and his wife Dee; Not sure if women are more romantic then men or just perhaps more nurturing; I'm certain a person can learn to be romantic, don't think it is something we are born with (like blue or brown eyes like mom and dad etc). Just my thoughts on your questions... lol. Neat posting Nira. Love your gorgeous composition to this photo. :o)

I think real romance is when both persons in a couple are so busy in thouht and actions to please the other that they kinda neglect their own needs to accomplish that goal,....to please the other. --beautiful capture--

Artist Reply: Again thanks for your thoughts and comments,Gregg...all the very best,NIRA