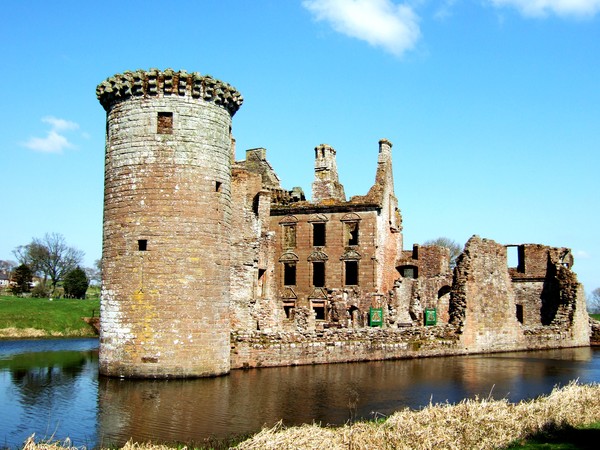 Surrounded by a double moat and hundreds of acres of flat marshy willow woods (known in Scotland as a "moss"), Caerlaverock was built to control the South-West entrance to Scotland which in early times was the waterway across the Solway Firth. Building began in about 1277, and by 1300 it was besieged by Edward I during his war against the Scottish king John (Balliol), a war still remembered for the brave resistance put up by the Scots under Sir William Wallace. Its triangular plan is unique in Scotland, and during the seige of 1300 it was noted as being "so strong a castle that it feared no siege... in shape it was like a shield for it has but three sides round it, with a tower at each corner... And I think that you will never see a more finely situated castle, for on one side can be seen the Irish Sea, towards the west and to the north the fair moorland, surrounded by an arm of the sea, so that no creature born can approach it on two sides without putting himself in danger of the sea. On the south side it is not easy, for there are many places difficult to get through because of woods and marshes and ditches hollowed out by the sea where it meets the river." http://www.aboutscotland.co.uk/caer/caer.html

Thank you for information and description.Great image.

Missed it first time round. Beautiful and great description!

I saw this Cynthia & thought; I don't remember posting this one. Then I realised its not one of mine. We choose near enough the same spot to shoot the Castle. Great minds Cynthia. Well done