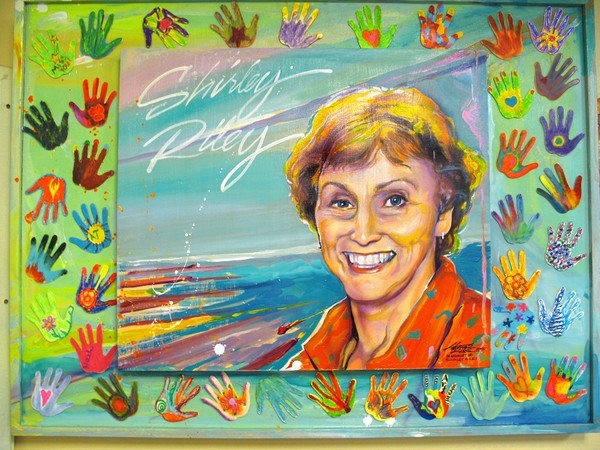 I was contacted to put together a portrait in honor and memory of a most incredible person named Shirley Riley. I decided to treat this portrait in an open and loose styled paint stroke approach. The colors were splashed right unto the surface and instantly blended with my hands, smudges and sables. The spirit and movement of this human-being was caught and several of her students painted and inscribed there farewell thoughts and loving wishes upon little wooden hands which I then glued to the border. Shirley Riley MA, ATR-HLM, LMFT, was a wife, mother of four sons, grandmother and a beloved teacher, supervisor and mentor. She will be especially missed at Phillips Graduate Institute where she was a faculty member in the Masters of Arts Program in Psychology, Marriage and Family Therapy (MFT) and Art Therapy since the programs inception in 1999, until her passing on September 13, 2004. There are multiple, significant ways in which Shirley Riley has impacted the art therapy field: that of teacher, supervisor, national and international presenter, public figure, clinician and respected author. Shirley was a regular presenter throughout Asia and Europe. She was repeatedly invited to present in the Netherlands, in Korea and Japan and through out the United States. She also presented at major national conferences and was often part of the main panel presenters. Her presentations were extremely well received and through her travels and connections she promoted art therapy conversations, exchange and communication. The family thanked me and graciously received this painting which now hangs in the institute above mentioned in her honor. HR-2005