Home / Artists / Ann Fawssett-Atkin / Image Detail
Note: Before you can add favorite images, you must be a ArtWanted.com member. Login now or create your free account. 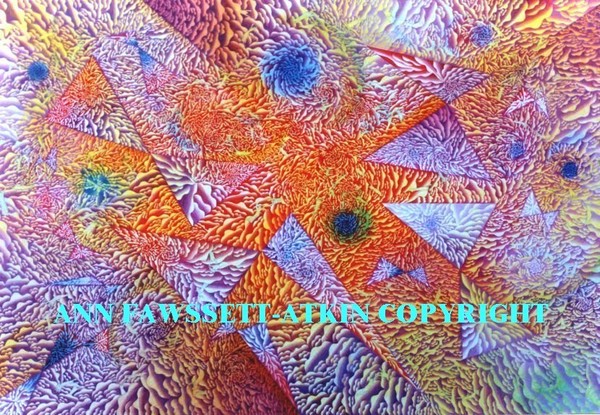 Since I was a small child I have loved, studied and painted the natural world as seen with my 2 physical eyes. In this painting there is also a direct link with my partners meditation technique: He writes: "I have been guiding people that are ready to develop a path to a kundalini with a special visual meditation on Skype.” ______________________________________________________________ After my kundalini I discovered inner depths that no words can describe. After this revelation I painted Kundalini Ascension 1 and Kundalini 2 (both about 5.5ft by 4ft and composed of literally hundreds if not thousands of what I perceived as pure energy shapes which , as in music , are all interrelated and interlocking - with many tiny figures of males and females within the vast infinite space they inhabit - with in each case one assisting the other to a higher level) directly as a result of what I can only term - going through - which in itself had the prerequisite of experiencing the fiery serpent, found at the base of the spine, an emotional current that runs along the spine, uniting what is below with what is above, and vice versa._________________________________________ Klee, Kandinsky, Mondrian, Giacometti, Victor Hugo, Pollack and the greatest psychologist Carl Jung would be very familiar with what I experienced. All my subsequent paintings have been 50% from my inner life/imagination and 50% from nature. My paintings became so enhanced that Dr David Weeks, a world renowned neuropsychologist, author, broadcaster and film maker wrote after meeting me and seeing Kundalini Ascension 2: This artist is Englands 21st century answer to Monet, and is undoubtedly a painter of creative genius.

Wonderful work! On Point ! And Captured with such perfection in Lighting!

I'm feelin' it Ann. And thats the point of the K energy, sometimes too dense, other times you intuit that you are experiencing a new realm, where the energy lives, talks through images? very accurate, if you can transfer feeling to media. blessings Deva

I Adore Your dedication to Details,Ann..so deep in Attention,and Depth.Well Done!

Thank you for your comment. I must say that your bstract work is outstanding. Nice colors, great composition. Judit

Artist Reply: Thank you so much Judit