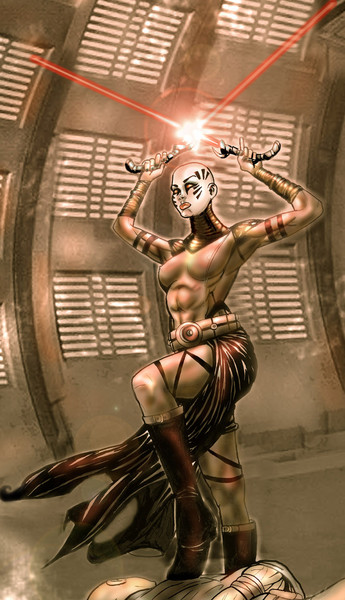 Ventress was a Dark Jedi, and one of Count Dooku's Force-attuned apprentices. She wielded twin red lightsabers. One time trained under a Jedi master and she was as skilled as any Jedi, but unable to control her anger. Asajj developed a hatred for the Jedi that had abandoned her mentor and ignored the bloodshed on her planet. Ventress defeated every other combatant in an audition and claimed herself to be a Sith. Impressed with Ventress' talents, Dooku recruited her by appealing to her disgust with the Jedi. After humbling her in a sparring duel, Dooku made her commander of his Separatist forces and gave her a pair of sabers with his trademark curved hilts. Sith Lord Darth Sidious personally assigned Ventress to kill Anakin Skywalker.