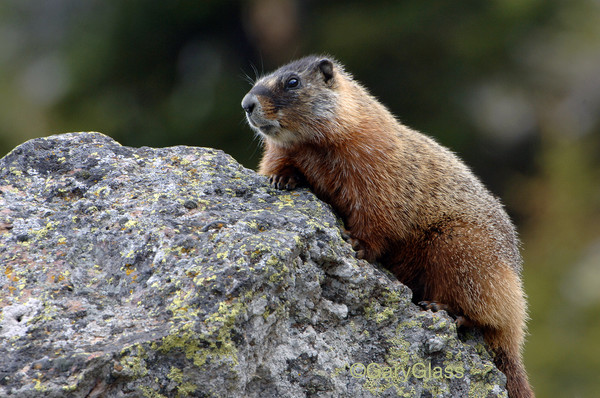 The Yellow-bellied Marmot (Marmota flaviventris), also called the rockchuck, is a ground squirrel in the marmot genus. It lives in the mountains of the western United States and Canada, including the Rocky Mountains and the Sierra Nevada. It inhabits subalpine and alpine regions, typically above 2000 m of elevation. Yellow-bellied Marmots usually weigh between 5 and 11 pounds (2 and 5 kg) when fully grown. They get fatter in the fall just before hibernating. A marmot's habitat is mostly grass and rocks with few trees. Their territory is about 20,000 to 30,000 square metres (about 6 acres) around a number of summer burrows. Marmots choose to dig burrows under rocks because predators are less likely to see their burrow. Predators include wolves, foxes, and coyotes. When a marmot sees a predator it whistles to warn all other marmots in the area (giving it the common name the whistle pig). Then it typically hides in a nearby rock pile. Marmots reproduce when about 2 years old. They live in colonies. A colony is a group of about 10 to 20. Each male marmot digs a burrow soon after he wakes up from hibernation. He then starts looking for females and by summer has 1 to 4 females living with him. Litters usually average 2-5 offspring per female. Marmots have what is called "harem-polygynous" which means the male defends 1-4 mates at the same time. Yellow-bellied Marmots are diurnal like most mammals. The marmot is also an omnivore, eating grass, leaves, flowers, fruit, grasshoppers, and bird eggs. Marmots are not hunted for sport but are sometimes killed by farmers. Yellow-bellied Marmots include "toilet rooms" in their burrows as well as living rooms, bedrooms and eating rooms. Taken near Lewis Falls ,Yellowstone Natl.Park Wyoming

Awesome..I capture a few of these guys on a mountain rockside.. do they come in black?..lol because I have a couple of photos of this color and black ones.

Excellent capture! Thanks for the grat write up! I've a prairie dog invasion going on my property. I'm going to compromise so that they have a safe area to live, where the dogs won't get them. They are sneaking in to still dry dog food outside. So I will plant some native foods for them, and wild bird seeds where the dogs can not bother them. They normally stay ouside our fence, but such a dry year, they are starving.

I love marmots alot and this is indeed a lovely portrait!!