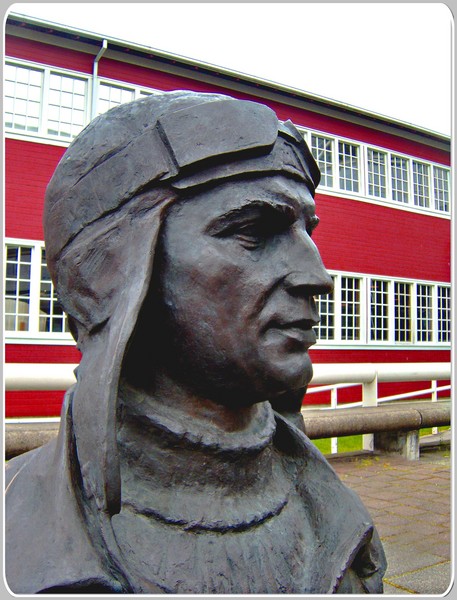 On June 20th 1937 three Soviet Flyers stepped from their plane onto the muddy grass of Pearson Field in Vancouver, WA. After take-off in Moscow they had spent over 63 hours in the air making the worlds first nonstop transpolar flight. Although icy headwinds forced the flyers to stop short of their San Francisco destination 5,507 (8,811km) miles was an amazing feat. Pilot Valery Chkalov, the leader of the flight crew is considered "Russia's Lindbergh." To promote Russian Aviation history in the Pacific Northwest, Prime Minister Vladimir Borisvick Bulgak presented this bust of Valery Chkalov tothe Museum of Flight in Seattle, WA on the 60TH Anniversary of the Soviet Transpolar flight.

Artist Reply: Gee John, What can I say. I guess when it comes to providing some nice shots of head you can always count on me. Ciao, Lara

BEAUTIFUL PHOTO and a very interesting text!!! love the red colours of the building behind the dark and strong bust!