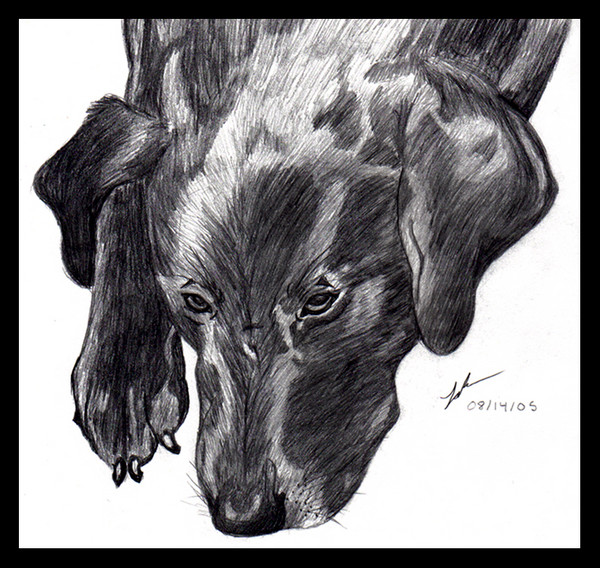 This was a really emotional piece for me to draw because Molly was so much more then a dog to me, she was more like a sister. We, my family, adopted Molly as a pup when I was 3 years old. She was put down when I turned 13 so I spent my entire childhood growing up with her. God, if I could only put into words what an amazing creature she was. I remember when I was four or five and I accidently tipped the pantry over which pinned me to the ground. The pantry was an 8 by 5 foot cabnet that stood independently from the cabnets fixed into the walls. It could be re-arranged, much like a couch, and I discovered, to my dismay, that it could fall over as well. My parents were outside at the time and no matter how hard I screamed, noone seemed to hear me....except for Molly. Molly, although a good 110 pounds at her time of death, was only a 20 pound puppy at the time but I remember her digging with all her might trying to get me out. In the end, it took my Dad to relieve me from the trap but I never forgot how hard Molly tried to save me. Another memory I have was on the forth of July, a year before her passing. Usually before we let off any fireworks we make sure that all the dogs are safe inside. I absent-mindly forgot to check if Molly was in before setting off a row of black cat fire crackers. After lighting the fuse, the expected "POP-POP-POP-POP" X 100 followed. What wasn't expected was Molly throwing me to the ground and laying and growling furiously at the fireworks in order to protect me. I felt so bad for the false alarm, but it almost made me cry knowing that she'd put herself on the line for my safety. Yet, I stray from the reason I drew this picture and why I started it at two in the morning. August 14th is my Dad's birthday. Although Molly meant so very much to every member of our family, none could compare to the love and happiness she brought my Dad. One memory in particular, my Dad was in a car accident and had screwed up his knee something awful. It took surgery and a year of theropy for him to recover. When my Dad came home from the Hospital, Molly would lay her head next to his pillow and watch him sleep. Then, when my Dad needed to go down the stairs Molly would walk right next to him and let him use her as a balance and safety net. My Dad would take the stairs very, very slowly one step at a time. Molly did the very same thing, even if it took them twenty minutes to get to the bottom of the stairs, Molly never left his side. As I was saying, August 14th, today, is my Dad's birthday. I had originally thought that today was the 13, which was when I planned to draw the picture. It wasn't till One thirty or so, just when I was going to bed, that I realised it was actually the 14th. X_X So I worked on this from 2:00 to 5:30, taking little cat naps here and there and trying so hard not to screw up. All in all, I think this took two hours in total. It's very hard for me to work this late at night, but I think I did pretty well considering. Happy Birthday Daddy.

This is a great rendering of an Angel placed on earth especially for you Lauren! I have a feeling she will be with you always and forever...