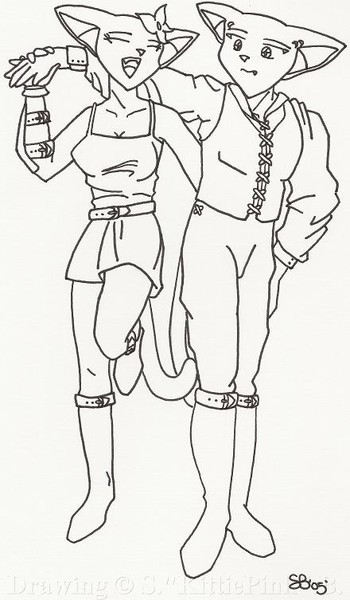 This is a drawing I did a while back ago, when I was playing EQ2. Originally, it was meant to be Koneko and another player that I had been playing with. However, hubby pointed out he looked more bat like, and terribly like the character I drew for the "KP Couple" drawing I did. Thus, I think that's going to be him from this point on. (which, I modeled after his fursona. ;)) Though, to note, I know he has a 'tail', I would have to edit that, should I decide that's the direction I'm heading, before I begin coloring. I particularly like this pic, because it's the first time I really did a character.. that, happy. She's just, so happy, she could, well, jump! (heh) In any case, this is only the inked version, and I DO plan on getting it colored, after I finish up my commissions. ^.^ Character(s) copyright to KittiePink (S.B.) and their respective owner(s). Image copyright to KittiePink (S.B.).