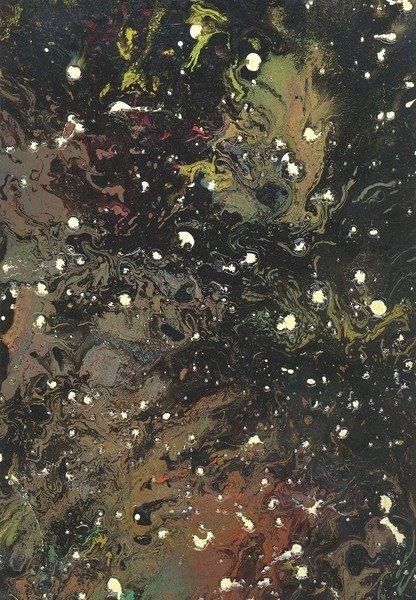 © 1972 Elton Houck "In the Beginning-GOD!" 24" x 14" on heavy art paper, ---------- Please read the most important aspect of this image presentation, the acknowledgement to the All Mighty for this wonderful world he provided for us. Genesis 1:1 IN THE BEGINNING GOD CREATED THE HEAVEN AND THE EARTH! Take note that it says IN THE BEGINNING-GOD! Before anything existed God was! Out of nothing he created all that exists and nothing exists outside of His sustaining and creative will. There are literally billions upon billions of heavenly bodies that can be seen by telescope. OUR GOD CREATED THEM ALL! And GOD gave each of them a name! Can you imagine this, billions upon billions and he can call each by their name! The magnitude of God's intellect cannot even begin to be grasped or imagined by mere man! Psalms 8:3-6; 9 When I consider thy heavens, the work of thy fingers, the moon and the stars, which thou hast ordained; what is man, that thou art mindful of him? And the son of man, that thou visitest him? For thou hast made him a little lower than the angels, and hast crowned him with glory and honor. Oh Lord our Lord, how excellent is thy name in all the earth! Psalm 90: 2 Before the mountains were brought forth, or ever thou hadst formed the earth and the world, even from everlasting to everlasting, thou art GOD. Listen to the words of Physicist Dr. G. Earl Davis from his book "Scientific Revelations Point to A God" "No material thing can create itself. If a universe could create itself, then it would embody in itself the powers of a Creator, a God, and we should be forced to conclude that the universe itself is a God & I choose to conceive of a God who has created a material universe not identical with himself but dominated and permeated by himself." From Physiologist Dr. Marlin Books Kreider in the book "Identifying Einstein's 'Creative Force'" "& the study of entropy, or the available energy of the universe, reveals a continual decrease from an initial point. This is the opposite direction required for organic evolution of simple protoplasm to complex man." Dr. Kreider on order in the universe: "This precision is so great that the path of planets and artificial satellites can be predicted in advance. This preciseness extends to the interaction of electric charges involved in chemical reactions. It allows most physical phenomena to be expressed by mathematical law and formula. Such order, according to common human experience, is a result of an orderly mind. Chaos rather than order emerges unless a designing or controlling force is functioning." From Biophysicist Dr. Paul Clarence Aebersold in the book "The Evidence of God In An Expanding Universe," Although science can develop very plausible theories of a cataclysmic birth of the universe resulting in galaxies, stars, worlds, and atoms, it cannot explain where all this matter and energy came from and why the universe is so constituted and so ordered. Straight thinking, clear reasoning, demand the concept of God." And from Physiologist and Biochemist Dr. Walter Oscar Lundberg in his work "Applying the Scientific Method," "In short, the scientific method is founded on ORDERLINESS and PREDICTABILITY in natural phenomena. It is precisely this orderliness and predictability in the framework of nonexistence of God, that is, absence of rationality is a meaningless contradiction." And to sum up God's view on this matter of His existence, his response IS RECORDED IN Psalm 53:1 "THE FOOL HATH SAID IN HIS HEART, THERE IS NO GOD." AND in Psalm 22:27 All the ends of the world shall remember and turn unto the Lord: and all the kindreds of the nations shall worship before thee.=================

Artist Reply: Thank you Ray my friend ....our God is awesome!!!!