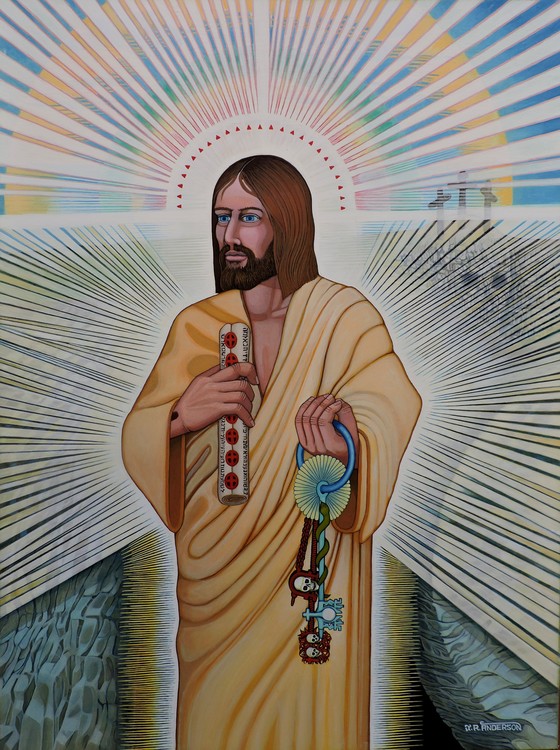 This painting depicts Christ at the moment of resurrection. He holds the seven sealed scroll (book), which is the Title Document for the Redemption of humanity and all of creation, having been paid for with His Blood. It also contains the authority to pour out upon an unbelieving mankind the wrath of God in preparation for His Millennial Reign. 1 Corinthians 15:20-28 But now Christ has been raised from the dead, the first fruits of those who are asleep. For since by a man came death, by a man also came the resurrection of the dead. For as in Adam all die, so also in Christ all will be made alive. But each in his own order: Christ the first fruits, after that those who are Christ’s at His coming, then comes the end, when He hands over the kingdom to the God and Father, when He has abolished all rule and all authority and power. For He must reign until He has put all His enemies under His feet. The last enemy that will be abolished is death. For He has put all things in subjection under His feet. But when He says, “All things are put in subjection,” it is evident that He is excepted who put all things in subjection to Him. When all things are subjected to Him, then the Son Himself also will be subjected to the One who subjected all things to Him, so that God may be all in all. 1 Corinthians 6:19-20 Or do you not know that your body is a temple of the Holy Spirit who is in you, whom you have from God, and that you are not your own? For you have been bought with a price: therefore glorify God in your body. Revelation 5:1 I saw in the right hand of Him who sat on the throne a book written inside and on the back, sealed up with seven seals. Revelation 5:5 and one of the elders said to me, “Stop weeping; behold, the Lion that is from the tribe of Judah, the Root of David, has overcome so as to open the book and its seven seals.” Revelation 5:9 And they sang a new song, saying, “ Worthy are You to take the book and to break its seals; for You were slain, and purchased for God with Your blood men from every tribe and tongue and people and nation. Christ also holds the keys to Heaven, Death and Hell. Golgotha is in the background. Matthew 28:18 And Jesus came up and spoke to them, saying, “ All authority has been given to Me in heaven and on earth. Matthew 16:19 I will give you the keys of the kingdom of heaven; and whatever you bind on earth shall have been bound in heaven, and whatever you loose on earth shall have been loosed in heaven.” Revelation 1:17-18 When I saw Him, I fell at His feet like a dead man. And He placed His right hand on me, saying, “Do not be afraid; I am the first and the last, and the living One; and I was dead, and behold, I am alive forevermore, and I have the keys of death and of Hades. John 19:17 They took Jesus, therefore, and He went out, bearing His own cross, to the place called the Place of a Skull, which is called in Hebrew, Golgotha. There is also an emerald rainbow around the risen Christ , similar to the rainbow around the throne in Revelation. Revelation 4:3 And He who was sitting was like a jasper stone and a sardius in appearance; and there was a rainbow around the throne, like an emerald in appearance. Scripture taken from the NEW AMERICAN STANDARD BIBLE®, Copyright © 1960,1962,1963,1968,1971,1972,1973,1975,1977,1995 by The Lockman Foundation. Used by permission.

THIS IS AN INCREDIBLE PAINTING, JIM.

Artist Reply: Thanks so much Sharon!