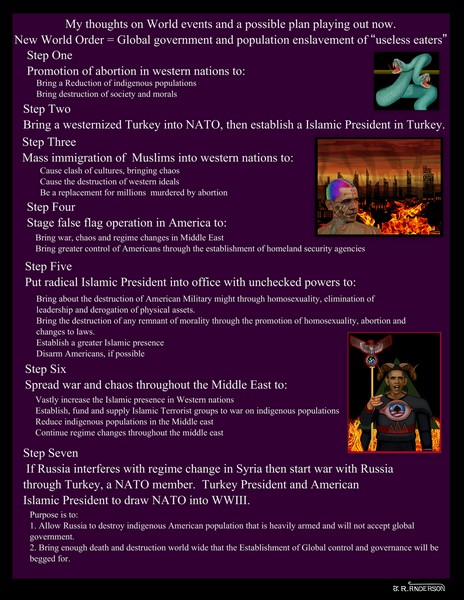 My thoughts on World events and a possible plan playing out now. New World Order = Global government and population enslavement of “useless eaters”. Step One: Promotion of abortion in Western Nations to: Bring a Reduction of indigenous populations and to bring the destruction of society and morals. Step Two: Bring a westernized Turkey into NATO, then establish a Islamic Turkish President. Step Three: Mass immigration of Muslims into Western Nations to: Cause clash of cultures, bringing chaos, and to cause the destruction of western ideals. These Muslims will also be a replacement for millions murdered by abortion. Step Four: Stage False Flag operation in America to: Bring war, chaos and regime changes in Middle East, and to bring in a greater control of Americans through the establishment of homeland security agencies. Step Five: Put a radical Islamic President into office with unchecked powers to: Bring about the destruction of American Military might through homosexuality, elimination of leadership and derogation of physical assets. Bring the destruction of any remnant of morality through the promotion of homosexuality, abortion and changes to laws. Establish a greater Islamic presence in the United States. Disarm Americans, if possible. Step Six: Spread war and chaos throughout the Middle East to: Vastly increase the Islamic presence in Western nations. Establish, fund and supply Islamic Terrorist groups to war on indigenous populations. Reduce indigenous populations in the Middle east. Continue regime changes throughout the middle east. Step Seven: If Russia interferes with regime change in Syria then start war with Russia through Turkey, a NATO member. Turkey President and American Islamic President to draw NATO into WWIII. Purpose is to: 1. Allow Russia to destroy indigenous American population that is heavily armed and will not accept global government. 2. Bring enough death and destruction world wide that the Establishment of Global control and governance will be begged for.

you thoughts are accurate and wonderful.............. but trying ti read this micro type makes it very difficult to be speed.......... no one wants to read a character or word at a time with a magnifying glass.

Artist Reply: You are correct. I put it all in the description below for easy reading. Thank you