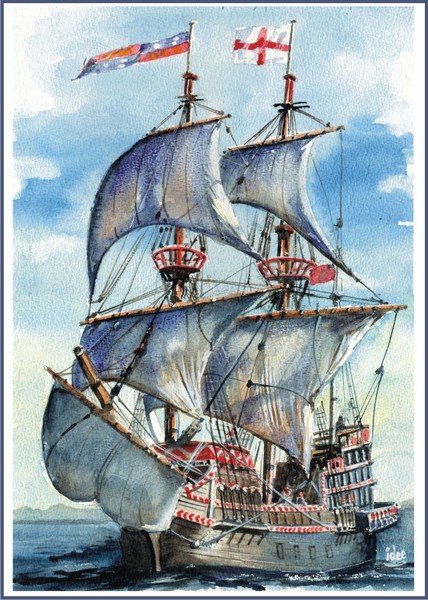 The ship with whom Francis Drake, at the end of the sixteenth century, as privateer, plundered an insane big prize on gold and jewels from the Spanish gold-ships in the Caraibean sea and in passant just made a trip arround the world. One should think how it was possible with a vessel looking like a wadling duck. The ship with a lenght of 31 m and a breadth of 9 m had a crew of 88 persons (yes, eighty-eight !) plus provisions and 22 heavy cannons. Plus the plundered goods and the spices acquired in India …. I think they had to use a shoe- horn to fill up their boat. Image size : 260 x 360 mm

BEAUTIFUL PAINTING OF THE "GOLDEN HIND" . FRANCIS DRAKE HAS BEEN A GREAT SAILOR AND PIRATE TOO.THANKS FOR SHARING !!!

This has personality and character