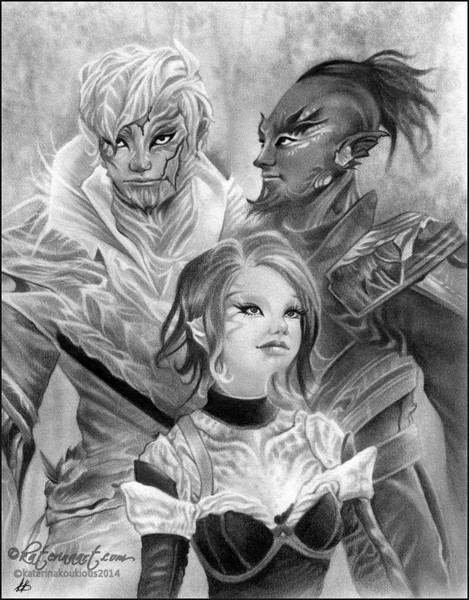 The sylvari of Tyria are a species of plant made in the image of the dwindling human race. Most known sylvari are born of the Pale Tree, the spiritual caretaker of the Dream, an empathic connection shared by the entire race. Inspired by the fey of myth, sylvari who remain connected to the Dream are a people divided between the Dreamers - those who cling to a code laid forth for them in ages past - and the Nightmare Court. The Nightmare Court, like the Unseelie Court, is a parody of chivalry and nobility, and every act of malice they commit is forever a part of the Dream in two places - from their perspective, and from that of the Dreamers inflicted with it. They believe that by dispelling the inherent morality of their brothers and sisters, they can ensure the survival and supremacy of their people. Valarhea is a recently Awakened sylvari - a sapling - who has had a rough life. After spending well past a month in the exclusive care of Baelfire of Hubris, a knight in service to the Nightmare Court, she was given precious little opportunity to interact with positive role models prior to her arrest by Oriaen, a warden of the Verdance. Oriaen and his dearheart, Keiranon, have taken Valarhea under their wing and begun to work on a more constructive future for the extremely energetic and sometimes hyperaggressive sapling. Art belongs to Katerina Koukiotis Characters belong to Key (Valarhea), Phono (Oriaen) and Toasty (Keiranon) Setting belongs to NCSoft. _