Who is He, Really? 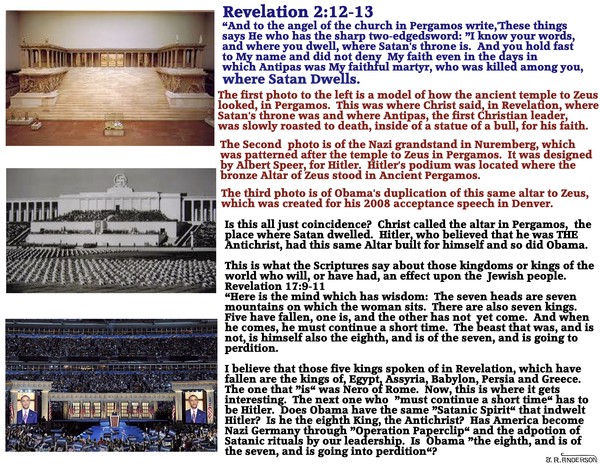 Hello all, Every day that passes, and Obama is not removed from office, convinces me that he is The Antichrist and that the United States has become the 4th Reich. Did you know that Hitler, his leadership and the Nazi Party were heavily into the occult? Hitler went through several demonic rituals to be indwelt by Satan. He considered himself TO BE The Antichrist of Scriptures. We also know that our modern Political leadership have also participated in occult rituals. Please open the attached picture now and review what I have put together. Now, consider this verse from Scripture: Revelation 17:11 11 And the beast that was, and is not, even he is the eighth, and is of the seven, and goeth into perdition. I believe that this Scripture in context with the other surrounding verses is speaking of the Beast, Hitler (indwelt by Satan) is the eighth, Obama (indwelt by Satan). It all fits, if you look at the evidence. I know, I am not the first to make comparisons because so many are actions of Obama have been so similar to Hitler. Just google "Hitler and Obama", you will find a long list of web sites. Look at all the preparations that this man has been doing, FEMA camps, plastic four body coffins, military build up of his own SS (DHS) and the purchase of 30,000 guillotines. He also has a GREAT hate for Jews and Christians. Open persecution of Christians will soon arrive in the US, if the rapture does not come first. It all will start one night, at two or three in the morning, when they go door to door, collecting people for the camps. It is coming soon, we probably should leave this country before the sxxx really hits the fan. 2 Thessalonians 2 5 Do you not remember that when I was still with you I told you these things? 6 And now you know what is restraining, that he may be revealed in his own time. 7 For the mystery of lawlessness is already at work; only He who now restrains will do so until He is taken out of the way. 8 And then the lawless one will be revealed, whom the Lord will consume with the breath of His mouth and destroy with the brightness of His coming. The restraining "He" in the above verse is the Holy Spirit that indwells the Church. The Christian Church is what is really restraining Mr. Obama from completing his evil plans. Look at how much he has succeeded in doing, with Christians on the earth. Think of how much he will be able to do when the Christians are removed.

Hey go to my Facebook page scroll down and look at my 3 Facebook videos with banner in background .