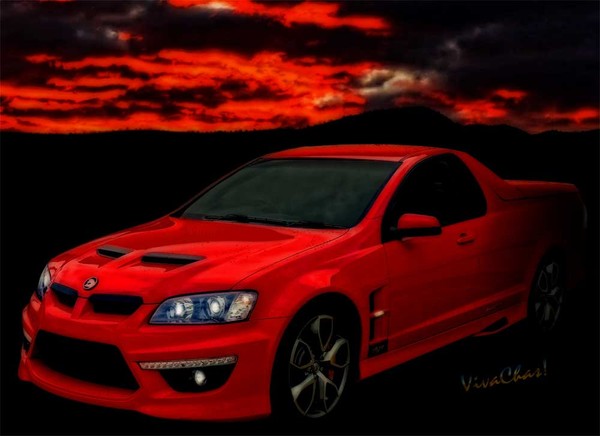 Okay - How can I put this? Maybe this will work - Coming Soon to the States - the new Chevy El Camino! Yea!! At last! Right! Now everyone's calmed down I'll continue. That New El Camino is likely to be a Holden UTE Maloo. Wha- loo? No the Holden Maloo is one of the greatest pickups down-under - maybe even the world. Yeh an Australian auto manufacturer - now owned by GM - Government Motors is likely to be the maker of the new Chevrolet El Camino that General Motors has been threatening to re-release for years. ~:0) The Holden Maloo the rest of the world gets is a genuine super-car. It's mill delivers something around 500 horsepower and the rear drive make for some exhilarating driving with traction control off - - - wait a mo. Not sure it even comes with the computer-controlled buffer b/tween the driver and the road. Now the reason I mentioned the "world-version" of the Maloo is that in the states b/c of emissions regulations, nanny-ism, and such the horses will be reigned back quite a bit. Fuel's better over there in Europe and down-under - Ha! Least that's what "They" say. That's right - here in the states - Cali in particular - the gazoline is sulfury, alcohol added weak soup compared to super fuels abroad. I know - I know - - - U don't believe it. That high-grade gaz is just one of the reasons there so much more horsepower out there beyond the Shining Seas ~:0) Now I'm sure U'll still be able to kick out the rear end on the turns in the new El Camino - probably. But I must say the Holden Maloo from across the seas is one screaming machine. And I rather have one of them than a Corvette as I wrote some weeks ago in a post about one of the new Vettes. My personal fave automobile naturally would be a total frame off resto that made a 57 Chevy a brand new Classic ride. But unless Chip Foose comes crashing through the old door - that is not going to happen around these parts - Ha! Why even ol'what'shername said to me she had no idea how she would get through to Foose for an Overhaulin' whatever - to which I replied - "Yeh don't trouble yerself JuJu - we're too far away nor are we interesting enough…" At that point I got something in the old eye and had to go out doors for a few minutes. Sad really - Ha! Now all together! Get up! Go out to the workshop and get back to work on the Willys Pickup project. I promised Juni I'd have it done by the end of March and the month are burning! - - - BTW - shot this "old" 2010 Holden after a rain storm up in the Texas Hill Country. We got it off the transporter it was riding made a few shots then back on it went in its journey Eastward - Ha! Get busy U lot! ~:0) VivaChas!

Artist Reply: Thanks Elizabeth - the Maloo is a very fine ride ~:0) VivaChas!

Artist Reply: Yeh RQ I do prefer more attractive rides usually something from the classic hot rod era - btw Maloo is full size, handles better than a Corvette (which isn't saying much), extremely powerful and fun to drive - but it is a bit on the 70's ugo side isn't it - most modern cars are ~:0) VivaChas!