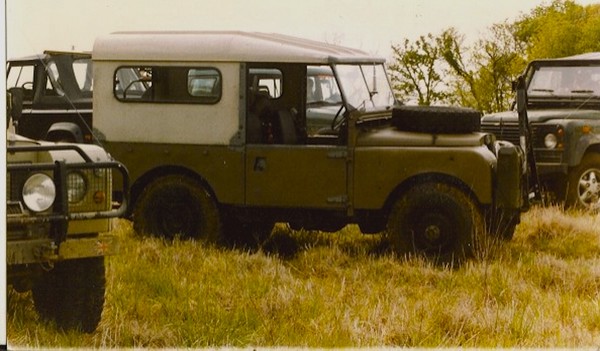 At one of our rover club challenges my 1954 Series One land rover sits between Land Rover Defenders and a Series Three during a break for lunch which was served in the forest on a white table cloth with champaign. Prime Rib was on the menue courtesy of Missouri D Senator Caskey who's land we had been guests on in this 1996 get together. After this it was a few hours of gymkana task trials including mud driving before heading home.

Artist Reply: Thanks John! Yea...that's what I drive. This one is a Series One(1954). On the right of it is a Defender and at the left is a Series Two. I drive Toyota Land Cruisers mostly though.

Artist Reply: Many thanks T!

Artist Reply: They are noisey and without any comforts but have a specisl beauty and appeal to them.

THAT SOUNDS LIKE FUN, VINCE. VERY LOVELY PHOTO. LAND ROVERS HAVE COME A LONG WAY IN STYLE AND DESIGN. BUT THESE LOOK LIKE THE TRUE SAFARI VEHICLES.

Artist Reply: That photo has an aged look yes. I used a 35mm film camera.