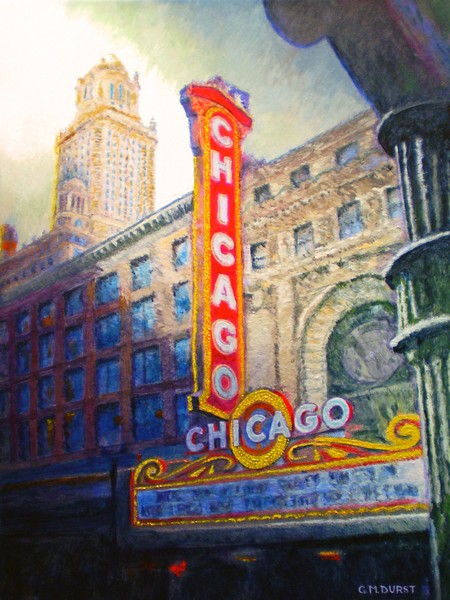 The grandeur of The Chicago Theatre often leaves its visitors breathless. This amazing building was called "the Wonder Theatre of the World" when it opened on October 26, 1921. The Chicago Theatre was the first large, lavish movie palace in America and was the prototype for all others. Built in French Baroque style, The Chicago Theatre's exterior features a miniature replica of Paris' Arc de Triomphe, sculpted above its State Street marquee. Faced in a glazed, off-white terra cotta, the triumphal arch is sixty feet wide and six stories high. Within the arch is a grand window in which is set a large circular stained-glass panel bearing the coat-of-arms, with two horses holding ribbons of 35-mm film in their mouths. In this painting I wanted to capture the dramatic urban light, with shadows from other buildings causing a dark luminescence, while at the same time showing the glare from the terra cotta tile of the façade of the theater. To make it even more dramatic, the light bulbs on the sign and marquee, glow. This is the scene as one steps off the “El,” the elevated subway, with its ironwork, which can be seen on the right side of the painting. This would have been the exact view that Al Capone and the famous Chicago gangsters would have seen in the 1920’s!

YOU ARE SUCH AN AMAZING ARTIST, MICHAEL. THIS IS A "WOW" PAINTING.