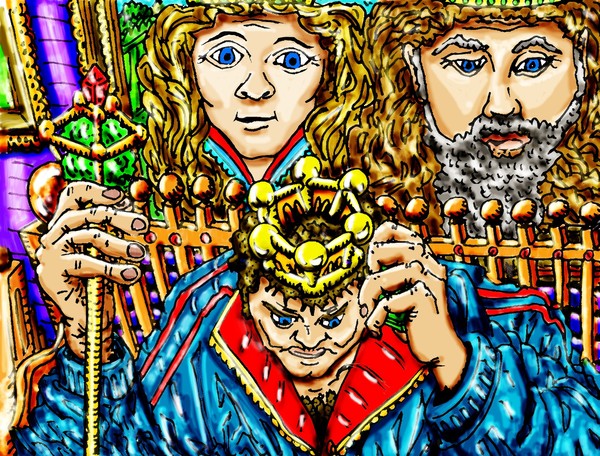 2011c The young king, who had just been crowned king, was newly on the throne with many decisions to be made. One very important decision was that of taxes. His father had taxed the people very heavily during his reign. But now the people came to him asking if he would lighten their taxes because they were a grevious burden to them. The king said unto the people, "Come back to me in three days and I will answer you." In that time the young king turned to his fathers counselors the elders of his fathers court. He asked them the people's question and what they would advise him to do. The elders answered him saying,"If you will speak peacably with these your people, and do unto them the kindness they ask,...you will have the hearts of these your people for as long as your magisty shall live and rule." But the young king did not listen to the words of his fathers elders, rather he turned to his childhood friends he grew up with for to hear what they would answer him of the question of the people. The young kings friends said unto him,"Say to these people my father burdened you with taxes as of a feather but I will burden you with ten times the weight of lead. My fathers whip was lite upon your backs but my whips will be as scorpions!" And the three days were passed and the people came to hear the young kings answer to their question. And the young king spoke the words his companions had given him to speak into the ears of the people. And when the people heard all he had to say to them they turned to him their backs and went everyone to their homes. And the young king sent his tax collector out among the people and when he was in the midst of a great crowd all the people began to throw stones at him till he was dead. And the young king, being there to see that the taxes were collected, when the stones began to rain down on he and the collector jumped on his horse and rode swiftly back to the palace. And the people throughout the land chose a man of their own to be king over them. And except for his own city and the countryside around it, the young king ruled no more over all the land of his fathers kingdom. If the young king had listened to good advise and used mercy in his judgment he would still be king over all the people.