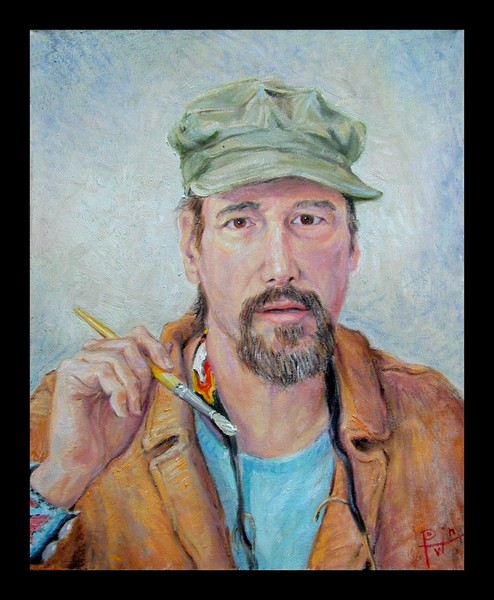 "During our vacation in 1965, I met my first true mentor, Taos artist Eric Gibberd. Eric was a fine impressionist artist who took a strong interest in me. Eric remained a vibrant and reverent influence in my life until his death" says Potwin.

After completing 12 years of Catholic school education and under Gibberd's mentorship, Potwin attended the University of Houston Fine Arts program from , studying under William Anzalone and Dr. Peter Gunther and a classmate of Julian Schnabel.

Potwin traveled extensively throughout his life and has had a variety of art-related positions from a fine arts publisher in New York City to a special effects painter at Astroworld Amusement Park in Houston. Working as an art importer and wholesaler afforded Potwin with opportunities to continue his art education in the Caribbean, Europe, and the Middle East. The artist has experienced periods of frenetic creative activitiy as well as periods of complete indolence.

To quote the artist, "I'm quite content to be a painter of pictures. For me, painting is a synthesis that considers the myriad aspects of human awareness, expressed in visual form, melding together philosophy, physics, sociology, emotion, mysticism, and eroticism with craftmanship. I like to tweak the colors to tease the eye with a sense of light and expressed energy. My work is "conceptual realism".

With one look at Potwin's paintings, you realize his broad assortment of conceptual realism subjects range from landscapes to portraits to observations of the world.

A recent critic said: "Directional brushstrokes and bold colors energize Potwins' landscapes as well as his self described "conceptual realism". His paintings show ties to impressionism, post impressionism and the german expressionists such as Otto Dix ( see the great Otto Dix site on ARTSY ) and Max Beckman , as well as a nod to pop surreralism . Perhaps conceptual impressionism would be a more precise description. There is an interesting interplay between light and shadow and the swirling patterns created by the application of the paint. Often the strokes of color seem to burst from the canvas. Henry David Potwin has to burst from the canvas. Henry David Potwin has been painting since childhood and his works span several decades. His mature work is personal and idiosyncratic, humorous and socially aware. Potwins' paintings are increasingly coming to the attention of collectors, as the internet has introduced his work to an international audience where he has gained a large and loyal following. if you have never seen Mr. potwin's work before, it is our pleasure to introduce you to this fine artist."

He adds: "Many of my paintings, still lifes, landscapes, underwater scenes are meant to be eye candy. I sometimes feel that perhaps my style is too broad, but I am not a one trick pony."

?In 1994, Potwin was sentenced to federal prison which he describes as the most cathartic event in his life. "this black sense of loss became a lens that focused my innate creative drive to crystalline clarity," says Potwin. During his incarceration, Potwin dedicated time to not only building his "Family" of paintings but also to helping other inmates realize their artisitic and creative abilities by teaching art classes and music lessons at the correctional facility. "Believe it or not, during the years as an art teacher to inmates, I had the opportunity to light a spark in the minds of a considerable number of disenfranchised individuals who only lacked the encouragement and the opportunity to discover their latent talents. Their pride of accomplishment is my reward", says Potwin.

Growing up playing the guitar and singing, Potwin formed his first band at 14 years old, and his love of music continues to grow. Potwin took on the responsibility for requesting recreational budget monies that enabled the inmates to realize their own artistic talents.

?He says: "My inspiration is drawn from many quarters. To list all of the great artists who have inspired me would be some list indeed. What I continually seek is to refine my vision and my craft. My goal is to create a body of work that is multi-layered and resonates with the public as well as the collector. " says Potwin.

Potwin now hangs his hat, paint brush and guitar in the South Texas Rio Grande Valley where the warm salt air and diverse demographics continue to inspire him.