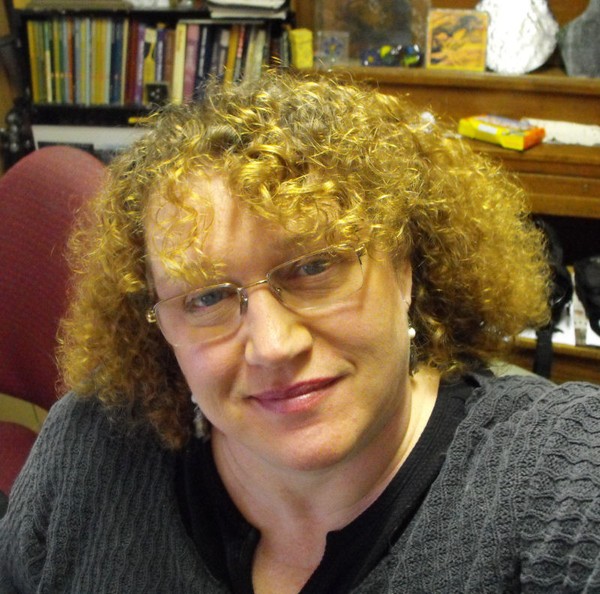 Sherry Boyd-Yost was raised in a family with 7 artistic siblings. Her parents fostered a creative environment, encouraging and supporting their children’s imagination, and their new works continually inspired each other. As a young child attending mass, she found the liturgy incomprehensible, but lost herself in the storytelling of the colorful windows. The splendor and impact of those luminous paintings inspired her profession in glass.

After her first stained glass class with Jimmy Powell 1977, she began working at Weiser Art Glass in Bellingham, WA. She worked on commissions, retail sales of glass materials, and taught classes in stained glass foiling and leading in 1978 & 1979. Deena Matlack then recruited her to Our Glass Co, in Bellingham, Washington where she worked from 1979-1982. This was a collaborative studio researching and experimenting with the secretive processes of the art of glass painting. Later, she launched her own studio.

In 1982 Sherry moved back to Spokane, Washington, where she established her business, Lost Art Originals. Her first Spokane project was a collaboration with Sauer Stained Glass, consisting of 15 hand painted center medallions of the life of Jesus Christ, for the Holy Trinity Episcopal Church.

In 1984, Sherry joined a seminar taught by Jochem Poensgen and Lutz Haufschild, along with 16 international architectural glass artists, at the 1st Architectural Glass Seminar held at the Hein Derix Studio in Kevelaer, West Germany. This seminar visited Joachim Klos, Georg Meistermann, Johannes Schreiter, Ludwig Schaffrath, Wilhelm Buschulte, Gottfried Böhm, and 2 other top German designers in their studios, and toured architectural installations by each designer. The artists also had studio time to create designs for a few mock projects. They worked with employees of the Hein Derix Studio who performed the multiple stages of creating large architectural windows commissioned by various designers from around the world.

1985 Sherry attended the Pilchuck Glass School on work-study program again studying with Joachim Klos and Lutz Haufschild. In the 1987, during half the summer session she returned as the manager and purchasing agent of art supplies in the Pilchuck store.

In 1986 Sherry began a large project for Central Lutheran Church, in collaboration with David Glass, a well-known glass artist living in Spokane. It consisted of four large sets of paired window lancets, each window 12 ft. X 2 ft. The Charles J. Connick Studio in Boston created the windows on the south side of the church, but closed their business before they could begin the north side. Sherry matched the style, design, and paint application of the originals.

Also in 1986 Sherry hosted a workshop in the Art of Glass Fusing with world-renowned author and artist Richard Lalonde.

In 1995 Sherry founded "Glass on the Grass," and with the great help of regional glass artists produces an art glass show. The show became an annual event at the Arbor Crest Winery.

Lost Art Originals is the primary glass painting studio in eastern Washington, where a number of glass painting and fusing workshops have been taught, and many large projects designed and built.