Enjoy a full year of beautiful art with my 12-month wall calendar!
Perfect for your home or office and makes a great gift idea. 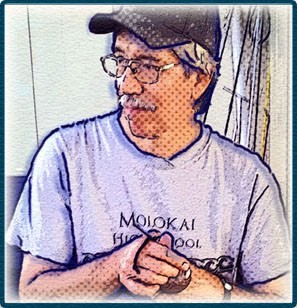 ~ ~ About ten years ago around this month (may 2006 ) I joined artwanted on my computer in San Diego. After being absent during a long season of change I've just returned to this site on my laptop here in Kaunakakai Molokai. ~ ~ If art is the emotional then illustration is the logical, and it's when both are occasionally mixed together that ideas I have in mind to communicate seem to happen best. When it was done professionally one was paid to help make another person's idea happen and is why after a first draft and a couple of complimentary (free) changes an hourly rate was determined. “Retirement” for me today means retirement from the “rat race” but it also means more choice of both rats and races...and that's because the race is still exciting. ~ ~ As a victim of my generation I like taking the mechanical “feel” out of computer-art but still enjoy digitally designing around hand drawn images for personal projects. This often involves tracing parts of photos or other artwork (including my own) into digital art with Adobe Illustrator for later Photoshop follow-ups. Re-rendering text into images (making it become part of the image) is another reason that my Photoshop7 and Illustrator10 make this retiree a happy camper. ~ ~ Song-writers are like poets that use music to punctuate their lyrics or to explain lyrics when words get in the way - almost like artwork uses line and color. It's when both music and art attempt to deliver opinion or contemplation that things get interesting, but sometimes all that's really needed is something to dance to or something to decorate. Either way it's done by those who enjoy doing it -- but not for want of votes or money because we just can't help ourselves.